This article has the most up-to-date info on the status of Childrens Hospital season 8 as we continuously monitor the news to keep you in the know. Unfortunately, Adult Swim has officially canceled the series. There will be no season 8. 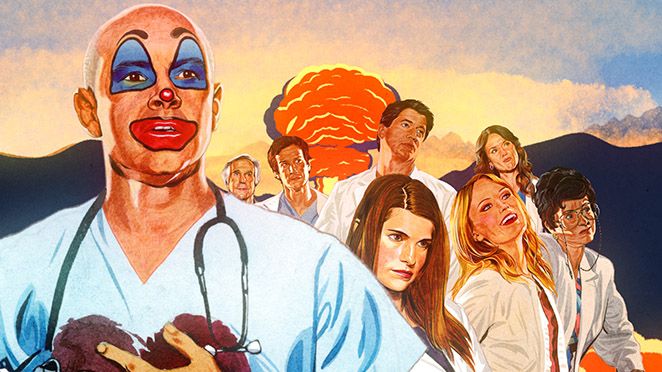 Children`s Hospital is an American satirical black and absurdist comedy television and web series, a parody of the popular medical drama genre. The series is created by and stars Rob Corddry and is developed Rob Corddry, Jonathan Stern and David Wain. The web series started off in 2008 with 10 five-minute episodes. Shortly thereafter, in 2009, Adult Swim bought the rights and began broadcasting the series. The highly anticipated seventh season debuted on January 21, 2016.

The plot of the series follows the medical staff at Childrens Hospital, The staff is off-the-wall bizarre, with one doctor who performs his duties in scary clown makeup and believes in the “healing power of laughter”, another one dies giving birth to her 6-year old boyfriend`s baby, still another doctor is a dimwit ex-NYPD cop, there`s everyone you can imagine in your wildest dreams right up to a horse wanted by the mafia. Many other characters, who are just as amazingly strange, are ineptly managing their social lives and convoluted sexual relationships, while every so often they are distracted by the need to actually do their work and treat young patients.

Awards, ratings and possibility of renewal

The series has won two Primetime Emmy Awards, in 2012 and 2013, and was nominated for two more in the Outstanding Special Class – Short-format Live-Action Entertainment Program. Childrens Hospital ratings have been excellent, with a strong momentum. It has been ranked as the #1 basic cable show in its time slot for the 18-24 demographic. The February 5, 2016 episode, one of the most recent ones, was seen by 1.127 million viewers and scored a 0.5 rating in the 18-49 demographic. It seems like the renewal prospects are rosy for Childrens Hospital at this point, so please wait for an almost sure renewal announcement from Adult Swim.

Updated March 5, 2016: Adult Swim has made a decision to stop the production of its offbeat series Childrens Hospital after its seventh season, which is currently on the air. The show`s canceled after a long deliberation by the creator team, Rob Corddry informed Vulture, which was the first to report the news. The series will bow out in April 2016.