This article has the most up-to-date info on the status of Secrets and Lies season 2 as we continuously monitor the news to keep you in the know. ABC has scheduled the premiere date for a new season for September 25, 2016. 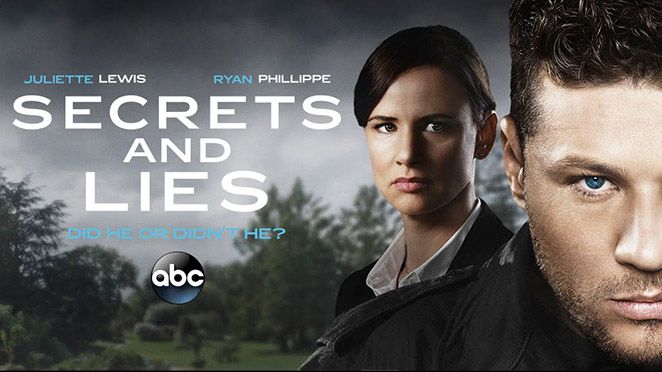 Secrets and Lies is a mystery drama TV series that follows a man who becomes the prime suspect in the investigation of a murder of a young boy. Developed by Barbie Kligman, the series is loosely based on an Australian drama of the same name. The first season of Secrets and Lies premiered on ABC on March 1, 2015 and was renewed for season 2 that is slated to air sometime this year.

Season 1 starred Ryan Phillippe as Ben Crawford, a self-employed decorator who discovers the body of a four year old boy and is immediately suspected of murder by Detective Andrea Cornell, played by Juliette Lewis. Having suffered a blackout after a night of heavy drinking, Ben is shunned by the community before he has a chance to prove his innocence. With numerous plot twists and turns, the first season of Secrets and Lies introduces audiences to a slew of other characters, including Ben’s wife, friends and neighbors. Shortly after renewing the show for season 2, it was announced that Ryan Phillippe would not return. The lead role in in the second season will be played by Michael Ealy, who will portray Eric Warner, a newly married man whose wife is murdered. According to producers, Juliette Lewis will stay on as Detective Andrea Cornell.

Secrets and Lies has received mixed reviews from critics and audiences. While more than 6 million viewers tuned in for the season premiere, the ratings dipped slightly throughout the season. With a 37% approval rating on Rotten Tomatoes and scoring 48 out of 100 on Metacritic, the series still managed to attract 6.5 million viewers for its season finale. With all that in mind, it took a couple of months for producers to announce the green-lit renewal for Secrets and Lies season 2, which is slated to premiere sometime in 2016.

UPDATED June 29, 2016: It looks like Sunday nights will offer television fans lots of intrigue, thrill and drama as the ABC network has finally finalized its 2016-17 fall programming lineup. The network’s much talked about and highly-regarded new anthology crime drama Secrets and Lies has also, at last, been assigned the premiere date. A second chapter of the series is expected to start airing in the US on Sunday, September 25, 2016 at 9pm ET/PT, followed by the sophomore season premiere of Quantico at 10pm. Sign up for our notifications and you will receive an automated reminder in your inbox of the release date of Secrets and Lies season 2 one day before the series starts.