This article has the most up-to-date info on the status of Good Witch season 3 as we continuously monitor the news to keep you in the know. Hallmark has officially renewed the series for another season expected to debut in 2017. To get notified of the exact premiere date – subscribe for updates below. 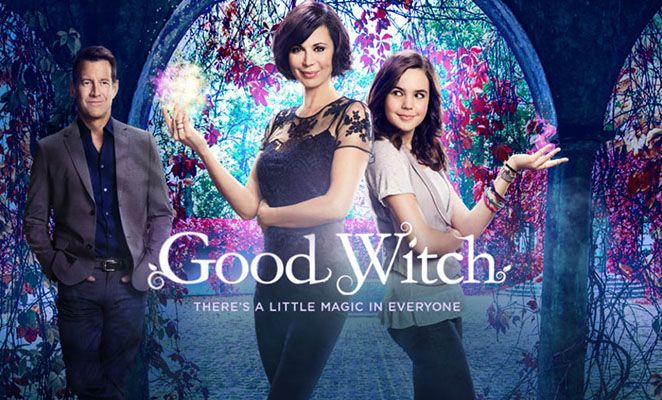 Good Witch is a comedy drama TV series that is based on the made for TV movie franchise with the same name. Staring the original Good Witch, Catherine Bell, the series debuted as a collaborative American-Canadian project between ITV Studios and the Hallmark Channel on February 28, 2015. The series was renewed for season 2 in October of 2015, and returned to the small screen on April 17, 2016.

Cassie Nightingale (Catherine Bell) is a newly widowed woman living with her teenage daughter Grace. The Radfords are Cassie’s new neighbors who become suspicious of the charming mother-daughter duo. After a series of surprises, Dr. Sam Radford (James Denton) and his teenage son realize that Cassie and Grace are not your typical girls next door. The romantic involvement between Cassie and Sam is not be at the forefront of the plot in the current sophomore season, while Sam attempts to keep his complicated family life under control, and Cassie`s old friend from the past surfaces with romantic plans of his own. Grace struggles with her gift of magic, hoping to fit in better if she abandons it.

After charming audiences in season one, a sneak peak of Good Witch season 2 debuted as a two-hour special on October 24, 2015, drawing a fantastic audience of over 2.6 million viewers. While this is a slight dip from the first season premiere, the fantasy dramedy had proven a true ratings hit for the network, with a sensational 2.6 rating in the L+3 that made it the channel`s highest-rated series. Scoring a 66% approval on Rotten Tomatoes and 7.2 out of 10 on IMDb, the series seems destined for further renewal, Stay tuned for network announcements!

The second season of Hallmark Channel`s popular fantasy comedy series Good Witch has ended with the second part of the season finale on June 19, 2016. It is currently the most-watched of Hallmark Channel series, and has attracted 2.295 million viewers for the season finale. One of the most family-friendly series currently on television offers just the right touch of magic and relatable, charming stories of a small Midwestern town. The season finale, titled “Perfect Match”, consisted of 2 parts and centered on the Lights Festival and activities leading up to it. Nick decides against a semester in London, and accepts another proposition that is made after he declines the London trip, the perspectives of Tara and Brandon`s relationship are still unpredictable, and Cassie and Sam, although eager to get involved, are still in flux about their future together. Additionally, the reasons behind Sam`s inability to attend the Lights Festival remain unclear. The charming dramedy has already been renewed for a third season, which is far from surprising considering the ratings it has delivered for the network. Keep an eye out for a Halloween special, and we will also inform you of the next season`s premiere date, which is set to occur some time in 2017.

UPDATED June 3, 2016: A bit of exciting news for the fans – Good Witch, a charming and popular Hallmark Channel dramedy, has been renewed for a third season of 12 episodes. The renewal announcement came ahead of the June 19 second season finale. Season three production is set to begin in Toronto in August 2016, and the premiere is expected in 2017, with a Halloween special slated to be released in October. Sign up for our automatic updates and we`ll be sure to inform you as soon as a release date is confirmed.

Share this with friends:
ReleaseDate.show » Release » Hallmark officially renewed Good Witch for season 3 to premiere in 2017
Related Serial
When Will

Hallmark has officially renewed When Calls the Heart for season 4

WGN America is yet to renew Salem for season 4

The release date for Salem season 4 — PendingThis article has the most up-to-date info on the status of Salem season 4 as we continuously monitor the news to keep you in the know. WGN America is yet to make a decision on its future. Subscribe to our…