This article has the most up-to-date info on the status of Tosh.0 season 9 as we continuously monitor the news to keep you in the know. Comedy Central has officially renewed the series for another season. To get notified of the premiere date – subscribe for updates below. 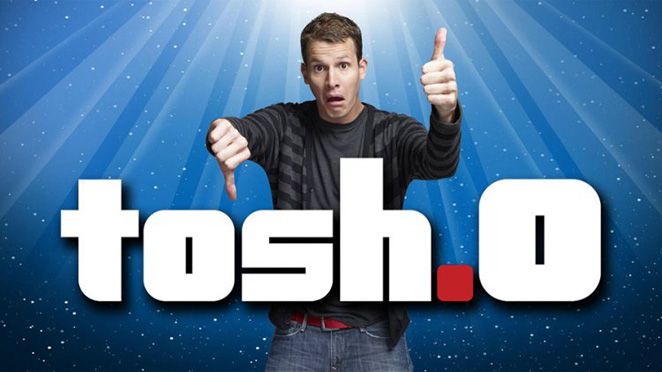 Daniel Tosh, veteran of stand-up comedy stars in Tosh.0, a satirical and black comedy US television series that became an unexpected hit in its first season with over a million viewers on the average. The program is created by Tosh and Mike Gibbons, executive produced by Tosh, Charlie Siskel and Christie Smith. It premiered on Comedy Central in 2009, and is currently in its 8th season that debuted on February 9, 2016.

Comedian Daniel Tosh`s commentary on the various aspects of the popular culture – celebrities, stereotypes, viral videos in particular a favorite target – is deliberately controversial and offensive to some. The show looks at life through the lens of the internet, as exec producer Charlie Siskel had put it. Tosh parodies some of the clips, and there is a set of recurring segments in each episode

The show targets young adults and had indeed ranked consistently as #1 in its time slot for men 18-24 and 25-34 in its premiere season, peaking at 2.7 million viewers per episode. The initial mixed and negative reviews that called Tosh.0 another late night viral video mash-up have since turned around, and the program is now considered deliciously vicious, with “moments of pure hilarity”. Tosh.0 currently has a respectable IMDb score of 7.5/10 and 95% on Rotten Tomatoes. It seems reasonable to assume that Daniel Tosh`s loyal fan base has a very good chance of seeing him in Tosh.0 in the future, and although no announcements have been made yet, we think that it`s only a matter of time before the series is picked up for another renewal.

Updated April 1, 2016: We knew it! There`s no end to satirical commentary by Michael Tosh, just as there`s no end to the supply of things online to comment on. Tosh.0 has been renewed for a 9th season, turning into a verifiable staple of Comedy Central. The show was renewed as a part of a bulk renewal announcement that the president of the network has just made. No news of a release date, so stay tuned and don`t miss any of the relevant news.

Share this with friends:
ReleaseDate.show » Release » Comedy Central has officially renewed Tosh.0 for season 9
Related Serial
When Will