This article has the most up-to-date info on the status of Vinyl season 2 as we continuously monitor the news to keep you in the know. Unfortunately, HBO has officially canceled the series. There will be no season 2. 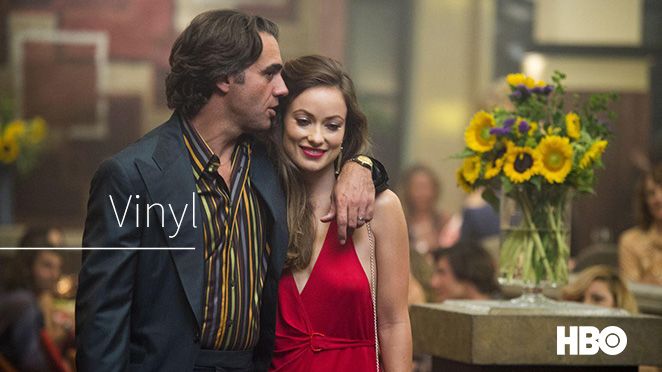 An American period criminal drama from a star-studded creator team, Vinyl premiered on HBO on February 14, 2016. The series was practically immediately renewed for a second season, which was announced on February 18, 2016. The series is created by legendary Mick Jagger, Martin Scorsese, Rich Cohen and Terence Winter, and produced by Paramount Television, Jagged Productions, Sikelia Productions and Cold Front Productions. The series contains ten episodes, with the pilot episode directed by Scorsese.

Vinyl`s headlined by two-time Emmy winner Bobby Cannavale, SAG Award nominee Olivia Wilde and multi-Emmy winner Ray Romano as Richie Finestra, his wife Devon and Richie`s confidante Zak Yankovich. Richie`s personal and professional crises are set against the 1970s New York City hectic and fast-paced music business scene. His recording company American Century Records is going through a troubling time, concurrently, there is family trouble between Ritchie and his wife, until a life-altering event puts everything in a different perspective for him.

The series premiered to 764,000 million viewers, gathering 687,000 viewers for the second episode and 533,000 for the third. Scorsese has also indicated that he plans to direct several more episodes of Vinyl, which should automatically increase the public interest. The volatile world of rock n`roll and everything connected to it is portrayed in an intense and passionate manner. Although the series currently has a very high average score of 8.2 out of 10 on the IMDb, the reviews seem rather mixed and many viewers have criticized the show for being inauthentic, clichéd and even pompous. Nonetheless, the network has decided to give the series a second chance and on February 18th renewed it for a second season.

A 10-part debut chapter of the new music drama concluded on the HBO network on Sunday, April 17, 2016. The 1970’s drama has managed to maintain a very solid viewership throughout its debut run, and has averaged more than 0.65 million fans per episode, giving the network a good reason for an early renewal. There has been some criticism of the show using every possible rock and roll cliché, but many viewers have still found it very entertaining and enjoyable to watch. In fact, rumor has it that Vinyl’s showrunner, Terence Winter has left after the series over some creative differences and will be replaced by Scott Z. Burns. It would be interesting to see whether this changes the feel of the story. As per usual, the season ended with a lot of unanswered questions, giving the creative team plenty of opportunities weaving new storylines. Stay tuned for the premiere date announcement for Vinyl season 2.

UPDATED June 23, 2016: As surprised as the fans were with the news of Vinyl`s renewal in mid February despite its ratings decline, they are bound to be even more puzzled at the abrupt cancelation decision that was just announced in a statement made by HBO officials. There will be no season 2, and the stellar creative team – Martin Scorcese,Mick Jagger, Rich Cohen and Terrence Winter (although Winter was set to be replaced as showrunner in season 2) - could not do much about it. Stay tuned just in case HBO managers change their minds regarding Vinyl once again.

SBS has officially renewed The Bridge for series 4

The release date for The Bridge series 4 — PendingThis article has the most up-to-date info on the status of The Bridge Series 4 as we continuously monitor the news to keep you in the know. SBS has officially renewed the series for another season.…

Showtime is yet to renew Roadies for season 2

The release date for Roadies season 2 — PendingThis article has the most up-to-date info on the status of Roadies season 2 as we continuously monitor the news to keep you in the know. Showtime is yet to make a decision on its future. Subscribe to…