The release date for House of Cards season 5 — Pending

This article has the most up-to-date info on the status of House of Cards season 5 as we continuously monitor the news to keep you in the know. Netflix has officially renewed the series for another season expected to debut in early 2017. To get notified of the exact premiere date – subscribe for updates below. 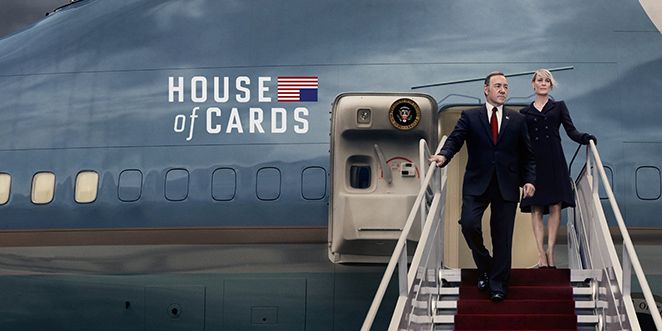 House of Cards is a mega popular, multiple award-nominated and Golden Globe award-winning political drama web show. The Netflix original series comes from the production studios Media Rights Capital, Panic Pictures and Trigger Street Productions and it is available exclusively online to the subscribers of the online streaming giant. It is a US adaptation of the same name British TV series which was based on a Michael Dobbs novel. The intense drama series debuted back in 2013 and the highly anticipated fourth season of the show came out on March 4, 2015.

House of Cards is an intense, thrilling and emotionally charged political drama about an ambitious congressman and now the 46th president of the United States Frank Underwood (portrayed by the one and only Kevin Spacey). After several season 4 trailers were unveiled, many movie critics have noted that it seems that the new installment of the series will lean more towards the genre of political thriller that traditional drama. The creative team has promised a lot of blood, fighting, action and even suicide attempts in the new episodes, but at the heart of it all will be the very contentious relationship between Frank and Clair.

It looks like the series is planning to stick around for a long time. The streaming service has already decided to renew its flagship series for a 5th season, which is slated for a 2017 release and will also have 13 episodes. The good news came out about a month ago, a few weeks before the current installment saw the light of day, which means that the network’s management has great confidence in the show and the success of the upcoming fourth chapter. To be honest, based on the past performance, countless critical accolades and most recent trailers, we highly doubt that Netflix will regret the early renewal. The renewal decision was made on the heels of the show’s creator and showrunner Beau Willimon announcing his leaving the project. He has stated that he was leaving the show after four seasons but he was leaving with a sense of pride for his work and confidence that he is leaving his brainchild in the hands of a talented and professional team. Willimon feels that he has done enough for the web series and wants to try his hand at something else. We personally will be looking forward to his next endeavor. On a positive note, Kevin Spacey was one of the first cast members who have already confirmed their participation in the fifth season.

Season 4 of House of Cards was made available on Netflix in its entirety (13 sixty-minute episodes) on Friday, March 4, 2016. If you thought that a subway murder in a second season was the most daring plot twist in the series, it means you haven’t watched episode 4 of the current installment. As a former journalist opens fire at Frank and his team while seeking out revenge, the President’s loyal bodyguard is fatally injured. After the previous chapter ended with Clair’s memorable words “I`m leaving you, Francis”, all bets are off in Frank’s toughest confrontation yet – the one with his wife who seems to have gone rogue. The newest chapter of Frank’s story has an unexpected new flavor of surrealism that is presented by vivid dreams and imagined acts of violence as the writing team goes much deeper into the lead character’s inner psyche. The addition of new characters, played by Ellen Burstyn and Neve Campbell, feel welcomed and nicely timed. All in all, this is another amazing and inspired effort by the creative team that is bidding farewell to its showrunner.

Share this with friends:
ReleaseDate.show » Release » Netflix officially renewed House of Cards for season 5 to premiere in early 2017
Related Serial
When Will