This article has the most up-to-date info on the status of It`s Not Rocket Science Series 2 as we continuously monitor the news to keep you in the know. ITV is yet to make a decision on its future. Subscribe to our automatic updates below. 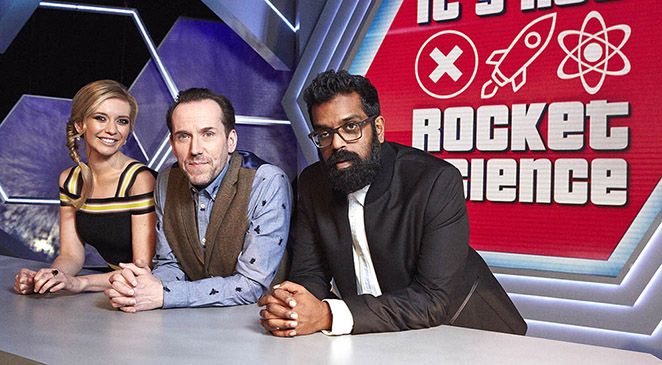 It`s Not Rocket Science is a British science-based entertainment show airing on ITV since February 16, 2016. The series is presented by Ben Miller, Romesh Ranganathan and Rachel Riley, produced by ITV Studios and executive produced by John Kaye Cooperand and Kalpna Patel-Knight.

The series aims to bring science to the masses through amusing experiments, thrilling stunts and emotional stories. It`s Not Rocket Science is a fast-paced, informative entertainment program recorded in front of a live audience. The experiments are awe-inspiring, as, for example, the first episode took Rachel Riley through scorching fire, Romesh Ranganathan was hung above a crocodile pit purely by the power of a vacuum cleaner to prove that it provides strong enough suction, followed by Ben Miller swinging on a huge wrecking ball that narrowly misses Romesh in order to illustrate the principle of momentum.

The show is not fulfilling the ratings hopes invested into it by the network, with the premiere episode scoring a mere 2.1 million viewers, which is a million below the slot average for 8 pm. The 5.8/10 IMDb score is based on only 14 reviews, but it does coincide with the current low ratings. Some of the viewers have pointed out that the show is overly simplistic for the time slot, and that it would be more appropriate for a children or teen audience, and that most of the show attempts to visually impress the viewer rather than explain the facts behind the experiments in a scientifically grounded way. Whether the series will be renewed or canceled is still a mystery, but with ratings as low as these, its chances of survival seem to be slim.

Subscribe to receive news and updates when a show is renewed or canceled. You will receive an automatic email when theIt`s Not Rocket Science Series 2 Episode 1 release date is officially announced.

Share this with friends:
ReleaseDate.show » Release » ITV is yet to renew It`s Not Rocket Science for series 2
Related Serial
When Will