The release date for Hap and Leonard season 2 — Pending

This article has the most up-to-date info on the status of Hap and Leonard season 2 as we continuously monitor the news to keep you in the know. Sundance TV has officially renewed the series for another season. To get notified of the premiere date – subscribe for updates below. 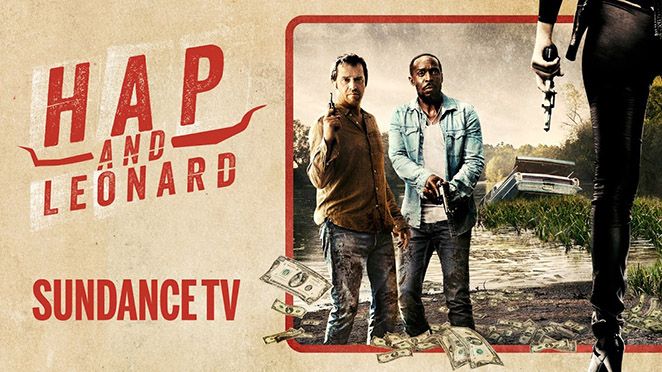 Hap and Leonard is a US television drama series on the crossroads of black comedy and criminal mystery drama. It`s created by Joe R. Lansdale and is based on his eponymous series of novels. The series is written by Nick Damici and Jim Mickle, produced by Sundance Studios and executive produced by Nick Schumaker and Jeremy Platt. The six-episode first season of Hap and Leonard premiered on Sundance TV on March2, 2016.

The quirky and amusing Pulp Fiction-like series is set in the 1980s, and portrays the 60`s activist/pacifist white laborer Hap Collins (James Purefoy) and his unlikely buddy Leonard Pine (Michael K. Williams), a quick-tempered openly gay Vietnam vet. The duo join Hap`s former wife/vixen Trudy (Christina Hendricks), who coaxes them into searching for a sunken treasure in the midst of the Deep South. Besides the adventures in Texan backcountry, another important subject for the series is friendship. The perfectly cast leads shine in portraying true amity and has excellent chemistry.

The series has received mostly favorable reviews from both critics and viewers, and has a 7.8/10 IMDb score and an 86% rating on Rotten Tomatoes. The viewership isn`t as impressive as the reviews, partly due to the fact that the series airs on Sundance TV, partly because that it`s conceived to appeal to a rather narrow audience. Hap and Leonard premiered to 429,000 viewers and slumped to 197,000 by the third episode. The series was originally released as a limited series, so it`s difficult to say whether the series` creator and producers will opt to discuss a renewal, but the viewers who are watching Hap and Leonard are desperate for more to come.

UPDATED June 30, 2016: Exciting news for the fans of the less-than-typical criminal drama/ black comedy series Hap and Leonard – the second season of the show has been commissioned by Sundance TV. Rumors of renewal have circulated for quite a while, but now it`s official, confirmed by star James Purefoy in his official Twitter account. Hap and Leonard will return in 2017 with a new showrunner, John Wirth, and 6 new episodes. The upcoming installment will be based on Landale`s Mucho Mojo, a 1994 book that is centered on the death of Leonard`s uncle and the investigation that ensues afterwards. Sign up for our updates and receive information regarding Hap and Leonard season 2 release date right in your inbox.

Share this with friends:
ReleaseDate.show » Release » Sundance TV has officially renewed Hap and Leonard for season 2
Related Serial
When Will