The release date for The Americans season 5 — Pending

This article has the most up-to-date info on the status of The Americans season 5 as we continuously monitor the news to keep you in the know. FX has officially renewed the series for another season expected to debut in Spring 2017. To get notified of the exact premiere date – subscribe for updates below. 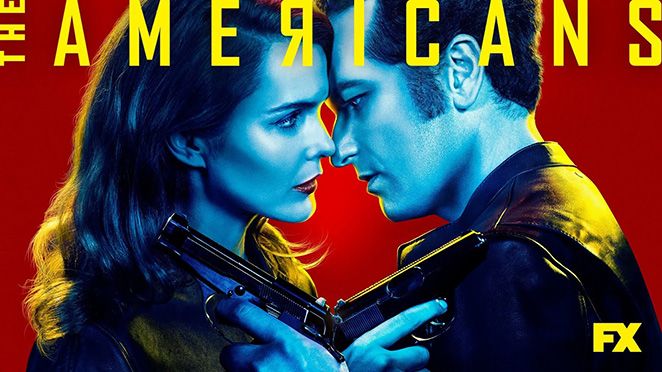 A period spy thriller, The Americans has been on the air since 2013, and is currently in its fourth season, which has premiered on March 16, 2016. The series is produced by Nemo Films, Amblin Television, Fox 21 Television Studios and FXP and is broadcast on FX in the United States. The creator and executive producer of the Americans is an ex-CIA officer, Joe Weisberg.

The series is set in the Cold War times in the early 1980s and chronicles the life of Elizabeth (Keri Russell) and Philip Jennings (Matthew Rhys), two KGB officers in an arranged marriage posing as an American married couple in the suburbs of Washington, D.C. They do have two children, one of whom gets gradually drawn into the spy intrigue, but the story is, according to the series` creator, more of a family drama than a spy thriller. The marriage becomes more genuine, but then is strained significantly under the pressures of the complex situation that the Jennings are in.

The series has been critically acclaimed from the outset, and the current fourth season is no exception, with a 100% rating on Rotten Tomatoes, and a 95% score on Metacritic. The fourth season of The Americans premiered to 1.11 million viewers, and sloped somewhat to 0.93 and 0.82 for the two subsequent episodes, which is perfectly on par with the previous season. The nuanced script, the well-developed characters, the multi-dimensional plot all make the spy drama a critics and viewer favorite, as well as a perfect candidate for another renewal. Stay tuned for further developments.

The 13-episode fourth season of The Americans has wrapped up on FX on June 8, 2016. 770,000 viewers have tuned in to watch the finale, while the season premiere was seen by an audience of 1.11 million fans. The finale proved somewhat muted in tone, but compelling nonetheless, with many possibilities laid out for the upcoming seasons to work with. William, the spy couple`s asset, is captured by the FBI and reveals some crucial information to Stan, just short of uncovering the identities of Elizabeth and Philip, The couple, however, assumes the very worst, and is urged to make an escape back to Russia. Paige and Matthew become more serious about their relationship, much to Philip`s displeasure. Philip`s long-lost son Misha makes an appearance, probably to take up a more significant place in the upcoming season. Two further seasons of the Americans have already been commissioned by the network – season 5 will consist of 13 episodes, and should be broadcast in 2017, and the final 10-episode sixth season is bound to air in 2018, concluding the series. Stay tuned for more information on the future of The Americans.

UPDATED May 26, 2016: In a highly anticipated move FX`s critically acclaimed and top-rated series The Americans has finally been renewed for a fifth and sixth seasons that are bound to conclude the story. The fifth season will contain 13 episodes and will be broadcast in 2017, and the final, sixth chapter will be reduced to 10 episodes, and should go on the air in 2018. The renewal was expected, as the third and fourth season averaged close to a million viewers per episode, and garnered excellent scores on review aggregator websites. In late April 2016 one of the show`s co-creators Joel Fields has already tweeted the news, but now the renewal is officially confirmed by FX. The generous two-season commission should allow the creators to complete the storyline in an unhurried, satisfying manner. No premiere date information has been released at this point for the upcoming season, so please sign up for our automatic updates and receive relevant info via e-mail.

UPDATED August 10, 2016: The penultimate fifth season of Cold War spy thriller The Americans is not premiering very soon, but at least now we know approximately when to expect it. The next chapter will air some time in the spring of 2017, as the series EPs Joseph Weisberg and Joel Fields mentioned at the TCA. Besides, they’ve dropped major hints, bordering on spoilers, regarding the fifth installment. Ready? Martha is not dead, Henry Jennings will become engaged in his parents’ spying affairs, and Paige’s involvement will grow much more risky and real. Meanwhile Misha is heading towards the United States, and the suspicions between Stan Beeman, Jennings FBI-related neighbor and the spy family grow, but in an unexpected manner. That’s a lot of thrills bound our way, so please stay tuned and we’ll bring you all the important info in a timely manner.

Share this with friends:
ReleaseDate.show » Release » FX officially renewed The Americans for season 5 to premiere in Spring 2017
Related Serial
When Will

The release date for Cold Feet series 7 — PendingThis article has the most up-to-date info on the status of Cold Feet Series 7 as we continuously monitor the news to keep you in the know. ITV has officially renewed the series for another season. To…