The release date for For Peete`s Sake season 2 — Pending

This article has the most up-to-date info on the status of For Peete`s Sake season 2 as we continuously monitor the news to keep you in the know. OWN has officially renewed the series for another season. To get notified of the premiere date – subscribe for updates below. 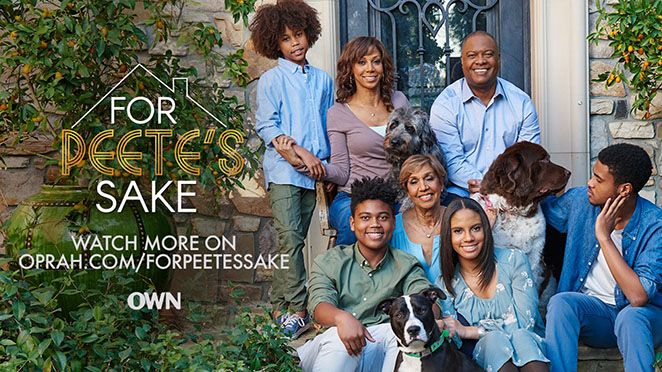 An OWN original docuseries, For Peete`s Sake features the family of Rodney Peete, an ex-NFL quarterback and currently a co-host of a program on Fox Sports, his wife actress Holly Robinson-Peete, their four children and Holly`s zany mother Dolores. The long-lasting marriage, fulfilling show business careers and the ever-growing family are all in the focus of the show.

For Peete`s Sake is produced by Tremendous Entertainment, with the Peetes serving as executive producers alongside Coleen Needles Steward, John Ferriter, Kyell Thomas, Shannon Keenan Demers and Andy Meyer. The freshman season debuted on March 19, 2016. The show airs on Saturday nights in the lineup with Welcome to Sweetie Pie`s, Raising Whitley and 2 Fat 2 Fly.

The series has a very decent 6.8 IMDb score and has a very positive air about it, without the overboard and forced reality drama that`s so frequently seen on the likes of this series. The Peete family deals with real issues in constructive ways, and obviously has fun being a family. It`s a nice change to see a reality series about people who achieved something in their lives, and then got a reality show of their own, as opposed to getting cast for a reality series and treating this fact as the greatest achievement of their lives. Holly and Rodney, who rose to fame in the 1980s-90s, know a lot more about real life than many of their counterparts from other reality series. It seems like For Peete`s Sake would be a great candidate for renewal, but ratings will ultimately be the decisive factor, and it`s difficult to predict the series` future at the moment.

UPDATED August 9, 2016: On August 8, 2016 OWN has announced the renewal of several of its popular series, and its original docuseries For Peete’s Sake was among those titles. The upcoming second season that details the life of Rodney Peete, Holly Robinson Peete and their family will be comprised of 8 episodes, but no details regarding a possible release date have been revealed, so please stay tuned and we will be sure to let you know when new information becomes available.

Share this with friends:
ReleaseDate.show » Release » OWN has officially renewed For Peete`s Sake for season 2
Related Serial
When Will

Channel 4 is yet to renew Flowers for series 2

The release date for Flowers series 2 — PendingThis article has the most up-to-date info on the status of Flowers Series 2 as we continuously monitor the news to keep you in the know. Channel 4 is yet to make a decision on its future. Subscribe to…