The release date for Mysteries at the Museum season 11 — Pending

This article has the most up-to-date info on the status of Mysteries at the Museum season 11 as we continuously monitor the news to keep you in the know. Travel Channel is yet to make a decision on its future. Subscribe to our automatic updates below. 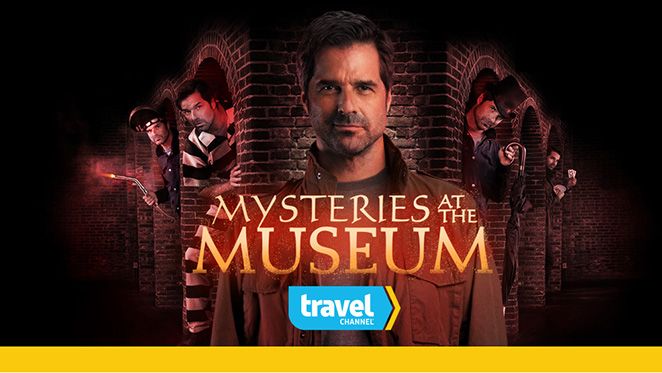 A mystery / documentary television series that`s been on the air since 2010, Mysteries at the Museum was created by Stephanie Angelides and Kurt Tondorf and hails from Optomen Productions. David Gerber, Nicola Moody and Dominic Stobart act as executive producers. The current tenth season premiered on Travel Channel on April 8, 2016.

Dan Wildman hosts the series, visiting various museums across the United States and narrating the background history behind mysterious and unusual artifacts. Among the objects portrayed over the course of the series were a T-Rex skeleton, Reagan limousine, prophecy sword, psychic horse, Damascus missile, and what not.

The show`s a popular one, with over a hundred 60-minute episodes that have already aired under its belt. Some amazing American history secrets are revealed in the exploration of the artifacts` stories. Archival footage, interviews with experts and re-enactments are featured as parts of Mysteries at the Museum. The program has spawned a series of specials as well as several series – Mysteries at the Monument, Mysteries at the Hotel and Mysteries at the Castle. The original series, Mystery at the Museum, has a very positive IMDb score of 8.3/10, an even more positive rating of 9.4 on TV.com, and is reviewed in a mostly positive manner. The show`s been very successful over the course of its run, and may very well last for a long time to come. Stay tuned for further developments in the future of the series.

Subscribe to receive news and updates when a show is renewed or canceled. You will receive an automatic email when theMysteries at the Museum season 11 Episode 1 release date is officially announced.

Share this with friends:
ReleaseDate.show » Release » Travel Channel is yet to renew Mysteries at the Museum for season 11
Related Serial
When Will