The release date for The Detour season 2 — Pending

This article has the most up-to-date info on the status of The Detour season 2 as we continuously monitor the news to keep you in the know. TBS has officially renewed the series for another season. To get notified of the premiere date – subscribe for updates below. 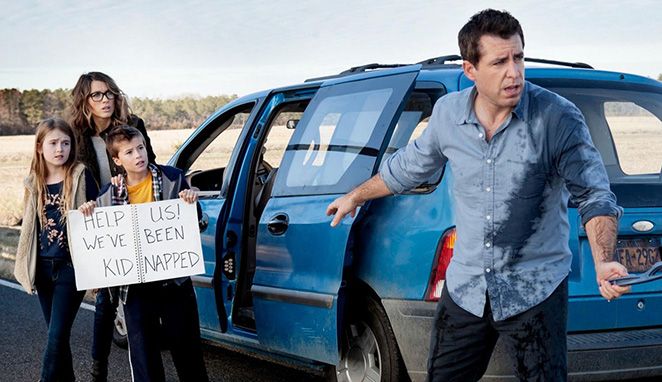 The Detour is a US comedy television series that premiered on TBS on April 11, 2016. Daily Show alums Jason Jones and Samantha Bee serve as writers and executive producers, and TBS Productions is the company behind the program. The show is based on the writers` own experience with family vacations, since they are a couple in real life. The freshman season contains 10 half-hour episodes. The Detour will also premiere in Canada on The Comedy Network on April 21, 2016.

Nate (Jason Jones), his wife Robin (Natalie Zea) and their twins Delilah (Ashley Gerasimovich) and Jared (Liam Carroll) take a road trip from upstate New York to Florida. Of course, their journey is derailed and they encounter various troubles and meet many crazy characters along the way. The sitcom is full of raunchy jokes, errors in parental judgement and hilarious outcomes of the slapstick set-ups.

The first two episodes of The Detour aired back-to-back and garnered an audience of 1.1 million viewers. The third episode was seen by an audience of 841,000. The series has a 7.7/10 IMDb score, 69% on Metacritic and 80% on Rotten Tomatoes. The performances are solid, and the humor edgy, and the reviews are mostly positive, although some of the reviews note the overbearing sexual innuendo and the inconsistent quality of characters` reactions. There`s a reasonable chance of the sitcom being renewed for another season, but since no announcements have yet been made, please stay tuned for relevant announcements.

UPDATED April 27, 2016: It has come to our attention that the road trip family comedy series The Detour was renewed for a second season by the TBS network even prior to the series premiere. The confidence that the channel has demonstrated was not lost in vain – the series is currently broadcast and attracts a sizable audience, with the premiere episode attracting over a million viewers. Please stay tuned for further developments and the release date announcement for The Detour season 2.

Share this with friends:
ReleaseDate.show » Release » TBS has officially renewed The Detour for season 2
Related Serial
When Will