The release date for Can`t Pay? We`ll Take It Away! series 5 — Pending

This article has the most up-to-date info on the status of Can`t Pay? We`ll Take It Away! Series 5 as we continuously monitor the news to keep you in the know. Channel 5 is yet to make a decision on its future. Subscribe to our automatic updates below. 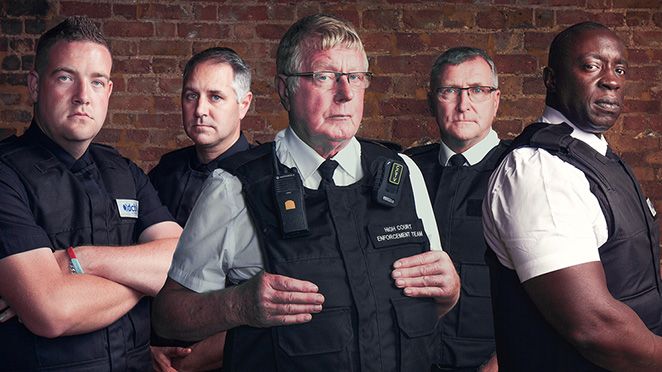 Can`t Pay? We`ll Take It Away! is a popular British documentary TV series airing on Channel 5 since 2014. The show`s currently in its fourth series, which began broadcasting on April 13, 2016. It is narrated by Jason Done, written by Ginita Jimenez, produced by Brinkworth Films and executive produced by Malcolm Brinkworth and Charlie Clay.

The series follows a group of High Court enforcement bailiffs and members of repossession teams around the United Kingdom. Debt collectors, debtors and creditors are all portrayed, and their respective perspectives are explored. The subject matter is relatable and evokes a lot of emotion in an average viewer, especially at a time of international financial turmoil like the present. It`s stressful to be a creditor who can not get back what they are owed, but the position of a debtor is far more vulnerable, as many of the people who find themselves deeper in debt than they can manage are in situations of dire and genuine hardship. The process of collecting debt is full of distress, tears, violence, lies, and endless stories of misfortune.

The series seems rather popular, although it does not necessarily provide a pleasant watching experience. Can`t Pay? We`ll Take It Away! has originally premiered to approximately 2 million viewers, and has held a reasonably steady viewership level throughout the three completed seasons. The current fourth season has premiered to 1.53 million viewers, and became the #2 program on Channel 5 on the week of its season debut. The program has a 6.4/10 score on IMDb. There`s been no news regarding a renewal of the show for a fifth season, but we`ll be sure to keep you informed of all relevant news.

Subscribe to receive news and updates when a show is renewed or canceled. You will receive an automatic email when theCan`t Pay? We`ll Take It Away! Series 5 Episode 1 release date is officially announced.

Share this with friends:
ReleaseDate.show » Release » Channel 5 is yet to renew Can`t Pay? We`ll Take It Away! for series 5
Related Serial
When Will

Channel 4 is yet to renew Gogglesprogs for series 2

The release date for Gogglesprogs series 2 — PendingThis article has the most up-to-date info on the status of Gogglesprogs Series 2 as we continuously monitor the news to keep you in the know. Channel 4 is yet to make a decision on its future.…

The release date for Flowers series 2 — PendingThis article has the most up-to-date info on the status of Flowers Series 2 as we continuously monitor the news to keep you in the know. Channel 4 has officially renewed the series for another season.…