This article has the most up-to-date info on the status of Mr. Pickles season 3 as we continuously monitor the news to keep you in the know. Adult Swim has officially renewed the series for another season. To get notified of the premiere date – subscribe for updates below. 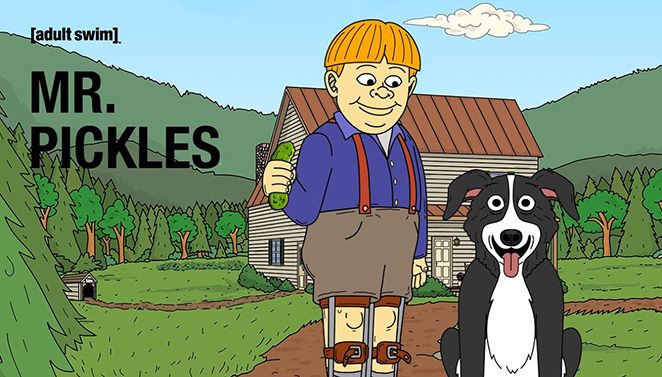 The surreal Adult Swim animated series Mr. Pickles has debuted in the fall of 2014, and is presently back with a second season that premiered on April 17, 2016. The show is created by Will Carsola and Dave Stewart, written by Carsola, Stewart and Sean Conroy and produced by HotHouse Productions and Day by Day Productions and Williams Street.

Old Town is where the Goodman family lives with their physically disabled 6-year-old son Tommy and their family pet, the satanic-skewing dog Mr. Pickles. Most of the plot revolves around their unlikely adventures around town. Mr. Pickles is quite a character – he is very protective of Tommy, loves killing and mutilation, has breast implants, is sexually attracted to Tommy mother and has a long list of other crazy traits that make him a very recognizably Adult Swim character.

The series has been doing rather well in the ratings department, with the freshman season premiering to 1.43 million viewers and averaging not far below that number. The second season premiere viewership is not as impressive, at 930,000 people. The fan base, however, seems strong, and there`s definitely a niche for the disturbing black humor and the twisted situations that characters are thrust into – or enter of their own will. Mr. Pickles` fans have rated the show 7.5/10 on IMDb, and even though there`s been no news of the series` future yet, we have a hunch that the lovable demonic pet will keep surprising the audience with its antics. Stay tuned and don`t miss the announcements from Adult Swim.

Adult Swim surreal animated series Mr. Pickles has concluded its 10-episode second season on June 27, 2016. The final episode attracted 0.804 million viewers and scored a 0.18 rating in the 18-49 demographic. The numbers are very decent for Adult Swim, and Mr. Pickles is bound to continue. The final episode features a young women seeking to seduce Grandpa and Grandpa discovering an old mysterious coin that he suspects is related to Mr. Pickles. Even though Mr. Pickles` episodes barely have any continuity between them, the season finale introduced a real cliffhanger – there`s an urgent need for an explanation behind the fact that Steve, Mr. Pickles` pet gimp, is actually Grandpa`s wife Agnes. The strong fan support already brought the series a renewal for another chapter, so this explanation is coming at some point – but we would have tuned in anyway.

UPDATED May 14, 2016: Turner company’s division, the Adult Swim network has enjoyed a very good decade, ranking as number one among millennials year after year. Inspired by such amazing performance, the network has unveiled its new programming lineup ahead of the annual 2016 Upfront presentation expected to take place in New York in a few days. The expanding original programming includes a handful of new TV shows as well as a number of returning favorites. Currently airing its second season, the animated comedy series Mr. Pickles has been officially greenlit for another round. Sign up for our updates and we will notify you via email when the release date of Mr. Pickles season 3 is announced.

Share this with friends:
ReleaseDate.show » Release » Adult Swim has officially renewed Mr. Pickles for season 3
Related Serial
When Will