The release date for Surfing the Menu: Next Generation series 2 — Pending

This article has the most up-to-date info on the status of Surfing the Menu: Next Generation Series 2 as we continuously monitor the news to keep you in the know. ABC (AU) is yet to make a decision on its future. Subscribe to our automatic updates below. 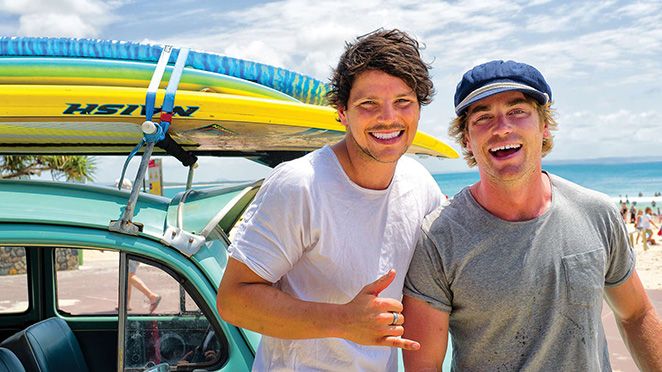 Surfing the Menu: Next Generation is a new Australian documentary series that premiered on ABC AU on May 22, 2016. It is produced by NoMa Films, and features Dan Churchill and Hayden Quinn as co-hosts. The first series is comprised of 13 episodes.

The original Surfing the Menu has proven to be one of the most commercially successful projects for ABC AU, having kickstarted chefs Ben O`Donohue`s and Curtis Stone`s international careers. Now Don and Hayden have taken over in the rebooted program. The two tour Australia in their hippy-era VW Bug, experiencing a wide variety of adventures – from horseback riding, catching mud crabs, snorkeling, and surfing to searching for bee nests underground. Of course, the food-related segment of the show is also rich in variety – the two co-hosts meet local food producers and turn their delicious ingredients into delightful meals.

The current season sees Don and Hayden, who are well known to the television audience from Masterchef Australia, venture out beyond the iconic Australian places to vis and explore the country to the full extent. In fact, Surfing the Menu: Next Generation is a stunning showcase of the beauty and charm of the Australian continent that is used by Tourism Australia. No announcements have been made regarding either a cancelation or a renewal of the program, but it is only a few episodes into its first series, so the network apparently wants to monitor the viewership ratings before rushing into a decision. However, the popular hosts, the familiarity of the original Surfing the Menu show, the stunning beauty of the scenery and the fun adventures the hosts embark on are bound to attract viewers. Stay tuned for further announcements.

Subscribe to receive news and updates when a show is renewed or canceled. You will receive an automatic email when theSurfing the Menu: Next Generation Series 2 Episode 1 release date is officially announced.

Share this with friends:
ReleaseDate.show » Release » ABC (AU) is yet to renew Surfing the Menu: Next Generation for series 2
Related Serial
When Will

The release date for The Katering Show series 3 — PendingThis article has the most up-to-date info on the status of The Katering Show Series 3 as we continuously monitor the news to keep you in the know. ABC (AU) is yet to make a decision on its…

Viceland is yet to renew Fuck, That`s Delicious for season 3