This article has the most up-to-date info on the status of Wrecked season 2 as we continuously monitor the news to keep you in the know. TBS has officially renewed the series for another season expected to debut in 2017. To get notified of the exact premiere date – subscribe for updates below. 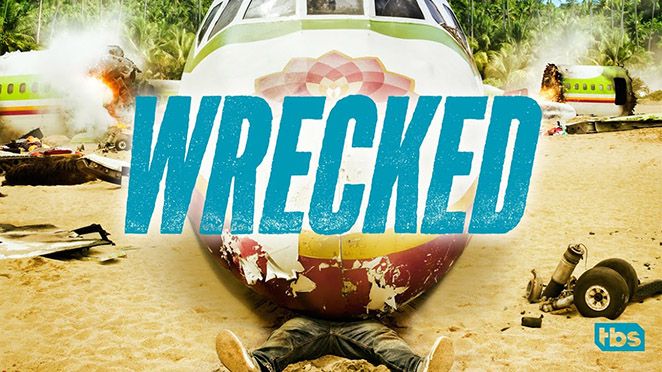 A parody television series, Wrecked debuted in the United States on June 14, 2016 on TBS with a 10-episode first season. The show spoofs the hit ABC mystery thriller series Lost. It is created by Jordan and Justin Shipley, executive produced by the Shipleys, James Griffiths and Moses Port and produced by Shipley and Shipley Productions and TBS Productions.

A diverse group of plane crash survivors on a mysterious deserted island are trying to, well, survive, while confronting ghosts from their past, look for answers and engage in soul-searching. Each episode introduces an amazing discovery that may change everything they have found out about their predicament thus far. The main cast includes Zach Cregger, Asif Ali, Rhys Darby, Brooke Dillman, Ginger Gonzago, Will Greenberg, Jessica Lowe, Ally Maki, Brian Sacca and James Scott.

The series premiered to 1.64 million viewers and, while some of the debut audience was lost, the viewership remains high, close to 1.3 million viewers per episode on the average. The 6.8/10 IMDb score denotes mostly positive reviews, although Rotten Tomatoes only grant the show a 50% rating, and Metactritic follows suit with 56/100. The audience response is more positive than that of the critical community, viewers seem to enjoy the silliness, the misfit characters, and even the usual genre tropes aren`t tiresome in this refreshing take on survival. TBS has not made a decision on the fate of Wrecked yet, so please stay with us for the most up-to-date information.

TBS’ Lost parody series Wrecked has concluded its successful 10-episode first season on August 2, 2016 with a two-episode finale. Owen and Rosa are reunited in the first part, and Rose reveals to him that since the crash she has stayed on the opposite side of the island with unclarified “friends”. Elsewhere, Steve and Owen are in a standoff, each wanting to claim control of the island. Wrecked has scored excellent ratings, with an average of 1.288 million viewers and a 0.46 demo rating. Moreover, TBS’ Executive VP of original programming Brett Weitz has informed that the series’ reach is at an impressive 5.2 million viewers across all available platforms – digital, mobile, linear and VOD. The show became the #1 freshman cable comedy series in the 18-49 demo, and was promptly renewed for a second season just before the freshman season finale. The spoof series’ next installment will also contain ten episodes and is scheduled for a 2017 premiere. Stay tuned for further announcements.

UPDATED July 7, 2016: The Lost parody has proven a great investment for TBS – the freshman season of Wrecked is presently drawing an audience of 5.2 million viewers per episode across multiple platforms. It is currently the number 1 new comedy on cable in the 18-49 demo in the L+7 estimates, so there is no surprise that the show was renewed for a second season. The sophomore installment is set to contain 10 episodes and will premiere in 2017. Stay tuned and we`ll inform you of the release date for Wrecked season 2 as soon as it is revealed.

Share this with friends:
ReleaseDate.show » Release » TBS officially renewed Wrecked for season 2 to premiere in 2017
Related Serial
When Will