This article has the most up-to-date info on the status of Animal Kingdom season 2 as we continuously monitor the news to keep you in the know. TNT has officially renewed the series for another season expected to debut in early 2017. To get notified of the exact premiere date – subscribe for updates below. 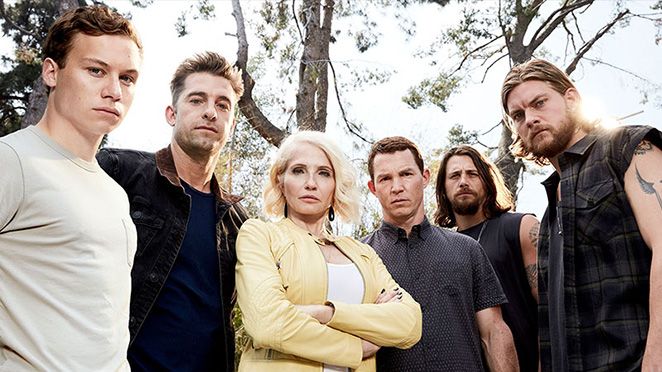 An American drama series, Animal Kingdom has premiered on TNT on June 14, 2016. It is based on the eponymous 2010 Australian film by David Mchôd, who also executive produces the series alongside Liz Watts, Andrew Stearn, Jonathan Lisco, John Wells, Etan Frankel and Christopher Chulack. The series hails from John Wells Productions and Warner Horizon Television.

Finn Cole plays the role of Joshua “J” Cody, a 17 year-old boy who moves in with a Southern California criminal family, the Codys, after his mother dies of an accidental overdose. Janine “Smurf” Cody Ellen Barkin) is his estranged grandmother and the tough leader of the gang. J`s very first outing to the beach with his three uncles (one more is serving six years) goes awry, as they commit an armed robbery and accidentally kill a policeman in the process.

The series premiere drew an audience of 1.31 million viewers, and the three subsequent episodes averaged approximately 1.15 million viewers. The series has scored mostly positive reviews, with an 8.1/10 on IMDb, 65% on Metacritic, and 72% on Rotten Tomatoes. Many of the reviewers, however, resent the fact that the series follows the brilliant Australian film too closely, yet lacks the depth of the original in both character development, dialogue quality and the pace of the storyline. The visual elements, such as cinematography, costumes, lighting, etc. are mostly praised, but the substance behind them seems to need serious work. However, Animal Kingdom is a show in the making, it is not even half-way through its first season, so it might surprise the critically-minded if given room to develop. Stay tuned for relevant announcements, and we`ll let you know whether TNT has given it that chance.

UPDATED July 7, 2016: The youngest-skewing drama on TNT, Animal Kingdom has been renewed for a second season on heels of excellent viewership numbers and week-to-week ratings growth. The Ellen Barkin and Scott Speedman-fronted series is currently reaching up to 6.7 million viewers per episode across platforms. The second season will come back in early 2017 with 10 new episodes. No release date has been set yet, so please sign up for our automatic updates and we will keep you informed.

Share this with friends:
ReleaseDate.show » Release » TNT officially renewed Animal Kingdom for season 2 to premiere in early 2017
Related Serial
When Will