This article has the most up-to-date info on the status of The $100,000 Pyramid season 2 as we continuously monitor the news to keep you in the know. ABC has officially renewed the series for another season expected to debut in Summer 2017. To get notified of the exact premiere date – subscribe for updates below. 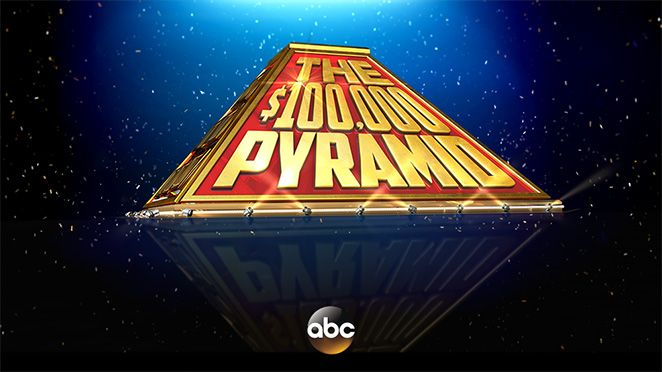 A word association game, The $100,000 Pyramid is a revival of the Pyramid, the Emmy award-winning classic staple of American pop culture. It is executive produced by Michael Strahan, Constance Schwartz and Vin Rubino. There have been many international and domestic versions of the 1973 show, and the latest re-imagined version of the program aired on June 26, 2016 as part of ABC`s “Sunday Fun and Games”. It is currently produced by SMAC Entertainment, hosted Michael Strahan and presented by Brad Abelle. The first season contains 20 twenty-minute episodes.

The game play is rather simple, and includes word guessing in one of the six vaguely defined categories that are presented on a triangle-shaped board. There is the main game round, and the Winner`s Circle, where only winners from the main round may play. Total winnings may go up to $150,000 under the most favorable circumstances.

Regular contestants are paired up with celebrities in two teams of two contestants each. The celebrity roster for the current season is very impressive and includes the likes of Martha Stewart, Snoop Dogg, Ken Jeong, Rosie O`Donnell, Zachary Levy, Niecy Nash, Jon Lovits, Yvette Nicole Brown, Fred Willard and many others. The $100,000 Pyramid debut drew a whopping 8.09 million viewers, scoring a share of 5 and a 1.5 demo rating. The previous incarnation of The Pyramid, which aired on GSN, lasted less than two months, so it would be curious to see how this version fares with the viewers throughout the season. Stay tuned and we`ll let you know.

UPDATED August 5, 2016: As part of ABC’s TCA executive presentation, the network president of entertainment has announced a renewal of its Fun and Games block, including the commission of $100,000 Pyramid for a second season, which is tentatively scheduled to air in the summer of 2017. The word association game was a breakout hit in its freshman season, drawing an 8-million audience for the series premiere episode. No release date has been set for the Michael Strahan-fronted program, so please stay tuned for network announcements.

Share this with friends:
ReleaseDate.show » Release » ABC officially renewed The $100,000 Pyramid for season 2 to premiere in Summer 2017
Related Serial
When Will

The CW officially renewed Whose Line Is It Anyway? for season 5 to premiere in Summer 2017