This article has the most up-to-date info on the status of Mercy Street season 2 as we continuously monitor the news to keep you in the know. PBS has scheduled the premiere date for a new season for January 22, 2017. 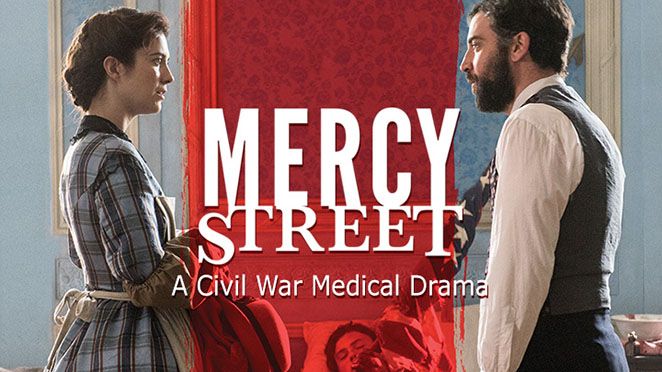 Mercy Street is a period drama set during the American Civil War. It is part classic family saga, part medical drama told from the medical staff`s point of view. There are two storylines unfolding simultaneously on opposing sides of the war, as the plot focuses on the lives of two volunteer nurses – Mary Phinney (Mary Elizabeth Winstead), an abolitionist from New England and Emma Green (Hannah James), a supporter of the Confederacy.

The series is loosely based on real letters and memoirs by doctors and nurses from the Civil War period, and the producers point out that the majority of the series` characters have real people as their prototypes. Mercy Street is making an entrance right as PBS flagship historical drama Downton Abbey is about to bow out in the beginning of 2016, so it will most certainly allow some of the viewers to get their quality historical drama fix. The scriptwriters and producers consulted extensively with experts in both historical and medical fields, the cast ensemble is an interesting blend of theater, film and television actors, the directors Roxann Dawson and Jeremy Webb have extensive experience in quality television series. It looks very promising, since the drama of the plot is intensified by real historical events. Civil War also coincided with (or, in many ways even caused) serious changes in perception of gender and slavery, and was marked by revolutionary developments in the medical field. All of this is reflected in this gripping series. We hope that there will be some form of continuation, even though it might be a bit too early to discuss a renewal prior to the series premiere.

UPDATED March 10, 2016: Just one day after the newest historical drama TV series Mercy Street wrapped up its 6-episode debut season on the PBS network in the US, the network officially announced the renewal of the hit new drama for a second round. The show became the first scripted original series for PBS in more than 10 years and the response from viewers and critics has been positively overwhelming. The new scripted series has been praised for anything from beautiful historical detail, to the depth of its characters and, of course, powerful performances by the cast members. The renewal decision was rather expected: the premiere episode of Mercy Street has attracted a total viewership of almost 6 million. Most of the current cast members, including Mary Elizabeth Winstead, Gary Cole, Brad Koed Jr., Norbert Tara Summers, AnnaSophia Robb and others have already confirmed their participation in the new chapter of the historical drama.

UPDATED July 30, 2016: The highly anticipated second season of the riveting historical PBS drama Mercy Street has had its release date confirmed. It is scheduled to air on January 22, 2017 at 8pm, and while there is still quite a wait, the network has revealed some details regarding the upcoming chapter. It is set to take the audience closer to the front lines, as well as to the decision makers on the Confederate side. The process of African Americans transitioning into their newfound freedom is also explored in a closer manner. There are new actors joining the cast, as well as guest star appearances in season 2, and we are bound to see newly introduced Brian F. O`Byrne, Bryce Pinkham, Lune Renee, Patina Miller, Chris Wood, William Mark McCullough and Nyambi Nyambi. Sign up for our automatic updates and receive a reminder one day prior to the premiere date.

This article has the most up-to-date info on the status of Mr. Selfridge Series 5 as we continuously monitor the news to keep you in the know. Unfortunately, PBS has officially canceled the series. There will be no Series 5.Series production info…