This article has the most up-to-date info on the status of Unplanned America Series 4 as we continuously monitor the news to keep you in the know. SBS is yet to make a decision on its future. Subscribe to our automatic updates below. 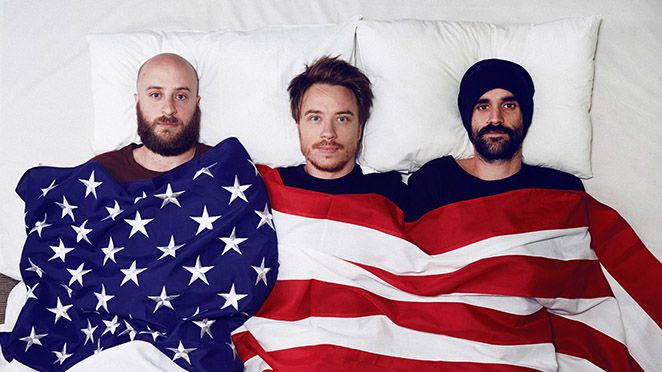 Unplanned America is an Australian gonzo travelogue documentary television series created, presented and produced by three friends – Pawel Jarecki, Tim “Gonzo” Ryan and Nick Maher. It`s curious to note that the journey was financed by the three mates on a shoestring, and then crowd-funded mid-way through the trip when the budget was stretched. The series originally aired on May 12, 2014, and the six-part third season premiered on SBS 2 on January 26, 2016.

The Aussie mates` road trip series delves still deeper beneath the usual stereotypical portrayal of American culture. This season Gonzo, Parv and Nick will participate in two voodoo ceremonies (as if one wasn`t enough), explore the internet sex industry, partake in the World Beer Pong Championship, learn a lesson from the Texas Militia, and do other unusual and quirky things not frequently seen on television.

The series has been very successful in its run on SBS 2, especially due to the fact that the network targets younger viewers, considering 16-39-year-olds its core audience. There is so much more to be explored in the USA, so many roads still untraveled, so many crazy things to take part in.. The only way to do it is without an itinerary, without a travel guide, without any plan at all. Why not renew this dynamic and hip road trip documentary? Seems like a great idea to us, now let`s wait for a renewal or a cancelation decision from the network.

Subscribe to receive news and updates when a show is renewed or canceled. You will receive an automatic email when theUnplanned America Series 4 Episode 1 release date is officially announced.

Share this with friends:
ReleaseDate.show » Release » SBS is yet to renew Unplanned America for series 4
Related Serial
When Will

ABC (AU) is yet to renew Soul Mates for series 3

The release date for Soul Mates series 3 — PendingThis article has the most up-to-date info on the status of Soul Mates Series 3 as we continuously monitor the news to keep you in the know. ABC (AU) is yet to make a decision on its future. Subscribe…

Viceland is yet to renew Abandoned for season 2

The release date for Abandoned season 2 — PendingThis article has the most up-to-date info on the status of Abandoned season 2 as we continuously monitor the news to keep you in the know. Viceland is yet to make a decision on its future. Subscribe…