This article has the most up-to-date info on the status of Mozart in the Jungle season 3 as we continuously monitor the news to keep you in the know. Amazon has scheduled the premiere date for a new season for December 09, 2016. 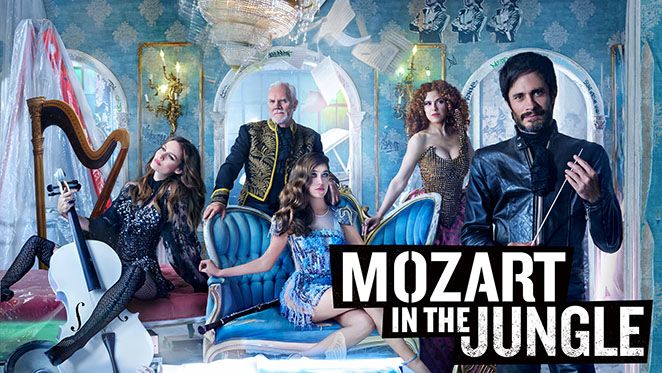 Mozart in the Jungle is an American drama and comedy television series co-produced by Picrow and Amazon Studios. It is developed by Roman Coppola, Jason Schwartzmann and Alex Timbers. The pilot aired on February 6, 2014, and the first season premiered on December 23, 2014, when all of the episodes were made available at once. The second season was made available in full online on December 30, 2015.

The series is based on Mozart in the Jungle: Sex, Drugs and Classical Music, a memoir by Blair Tindall, a professional oboe player in NYC. The half-hour comedy deals with building a professional career in music, looking for love and hoping for a big break. The series stars Lola Kirke as Hailey Rutledge, a young oboist and Gael Garcia Bernal as Rodrigo De Souza, an energetic conductor who is shaking up New York Symphony. The cast also includes such renowned actors as Saffron Burrows, Malcolm Macdowell and Bernadette Peters.

Mozart in the Jungle has been praised by critics and viewers alike. Its elegance, charm, excellent performances, magnetic Bernal noted in particular, as well as the amusing comedy writing, and relatable witty dialogue are all mentioned in the unanimously positive reviews. With a 95% “fresh” rating on Rotten Tomatoes, an 8.2 rating on IMDb, and universal praise, Mozart in the Jungle is a rare gem. The series is nominated for the 2016 Golden Globe in the Best Television Series – Musical or Comedy category. Even if it doesn`t receive this award, all of the reviews certainly warrant a renewal, and if it does win a Golden Globe, the renewal is a sure thing. The Golden Globe award ceremony is set to air on January 10, 2016, so stay tuned and find out whether the program will receive the well-deserved accolade.

UPDATED February 9, 2016: Following the January 2016 Golden Globe awards for Best TV Series (Comedy or Musical, as well as Gael Garcia Bernal`s Best Actor in a TV Series (Comedy or Musical), Mozart in the Jungle did not have a chance for anything but a renewal. Amazon has announced the series` return for a third season on February 9, 2016, just weeks after the award ceremony. In the third season the New York Symphony musicians will head to Europe, led by their passionate conductor Rodrigo. The release date for the new run has not been set yet, so please stay tuned for new developments.

UPDATED August 8, 2016: The critics’ darling and viewer favorite classical music-related workplace comedy and drama series Mozart in the Jungle has had its third season’s release date confirmed by Amazon. The upcoming installment of the 2016 Golden Globe winner for Best Television Series, Comedy or Musical, AND Best Actor for Bernal will be available for streaming on Amazon starting on December 9, 2016. Season 3 will feature the musicians on a trip to Europe and is set to include a guest star appearance by Monica Bellucci. Sign up for our automatic updates, and we’ll drop you a reminder one day before the season 3 premiere of Mozart in the Jungle.

Share this with friends:
ReleaseDate.show » Release » Amazon scheduled Mozart in the Jungle season 3 premiere date
Related Serial
When Will