This article has the most up-to-date info on the status of Major Crimes Season 6 as we continuously monitor the news to keep you in the know. TNT is yet to make a decision on its future. Subscribe to our automatic updates below. 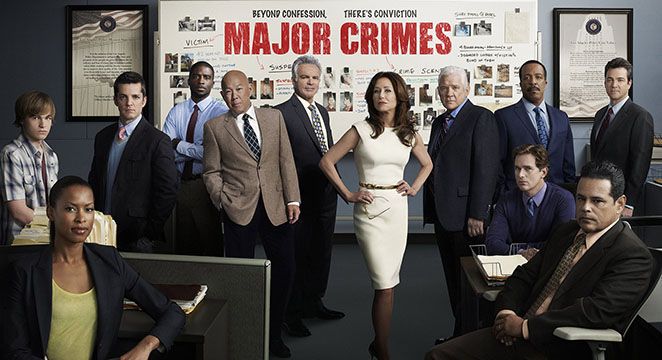 Created by James Duff, Major Crimes is an American crime drama television series that follows the life of a Captain in the Los Angeles Police Department played by Mary McDonnell. The series is a spinoff of another TNT drama, The Closer, which was cancelled in 2012. Receiving generally favorable reviews, Major Crimes Season 5 premiered on TNT on June 13, 2016.

Captain Sharon Raydor has been recently selected to become the new head of the Major Crimes Division of the LAPD. Facing the challenges of gaining trust and confidence of her detectives, she attempts to keep a close watch on her subordinates and build airtight cases that will not have a chance to get thrown out of court.

This is a sharply written gripping drama that boasts good acting and stellar dialogues. The show is broadcast in 18 counties, including the US, and has had some of the highest viewer ratings of any new series on cable. Season 5 originally received a 13-episode order, and then on June 22, 2016 eight additional episodes were commissioned.

In the current season the high-profile unit of the LAPD investigates a seemingly ISIS-inspired beheading, searches for the murderer of a possibly corrupt cop, looks for a missing teenager who disappeared while volunteering, and does a whole lot more to bring justice to the City of Angels. The investigators` personal life continues to be full of pressure as well. Sharon attempts to push her adopted son through college and figure out the direction of her ongoing romance with Andy Flynn, Julio Sanchez makes a decision to adopt a child, Provenza deals with marriage issues, Ann Sykes makes critical choices regarding family and career, Buzz Watson picks up the investigation of his father and uncle`s murder that occurred 30 years ago, and Mike Tao receives an award for consulting on a Hollywood production. Having averaged 3.57 million viewers per episode in the fourth season, the series has already bettered the average in the fifth chapter, with a 3.754 million average so far for the first three episodes. Major Crimes is a great success for TNT, and is likely to stay just as popular. Stay tuned for relevant announcements.

Subscribe to receive news and updates when a show is renewed or canceled. You will receive an automatic email when theMajor Crimes Season 6 Episode 1 release date is officially announced.

Share this with friends:
ReleaseDate.show » Release » TNT is yet to renew Major Crimes for Season 6
Related Serial
When Will

TNT is yet to renew Cold Justice for season 4

TV One is yet to renew Fatal Attraction for season 5