This article has the most up-to-date info on the status of 12 Monkeys season 3 as we continuously monitor the news to keep you in the know. Syfy has officially renewed the series for another season expected to debut in 2017. To get notified of the exact premiere date – subscribe for updates below. 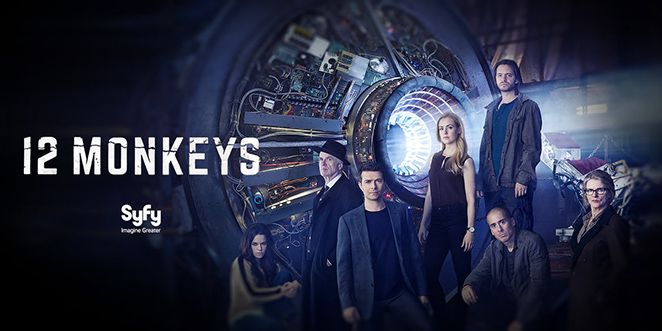 A science fiction mystery drama series based on Terry Gilliam`s eponymous cult film, 12 Monkeys premiered on SyFy in 2015. It is currently in its second season, which was released on April 18, 2016. Each of the seasons contains 13 one-hour episodes. The series was developed by Terry Matalas and Travis Fickett, executive produced by Natalie Chaidez, Charles Roven and Richard Suckle and produced by Atlas Entertainment and Universal Cable Productions. Besides the United States 12 Monkeys also airs on SyFy UK.

The plot of the series revolves around James Cole (Aaron Stanford), a time traveler who returns to the present from 2043, determined to prevent the release of a deadly virus that would otherwise kill 93.6% of humankind. Virologist Cassandra Railly (Amanda Schull) and a psychologically troubled math genius Jennifer Goines (Emily Hampshire) assist James on his dangerous mission.

12 Monkeys has originally premiered to 1.35 million viewers in the United States, declining to mere 660,000 for the season one finale. If there were any hopes for the ratings to pick up in the second season, they have failed miserably, as its recent premiere attracted an audience of just 470,000 viewers, slipping yet further to 310,000 for the second episode. The series does, however, have a respectable 7.6/10 IMDb rating, and a 72% viewer approval rating on Rotten Tomatoes. What does the future hold for this contradictory series? Stay tuned and we will keep you informed.

The 13-episode second season of 12 Monkeys has concluded on July 19, 2016 on SyFy. The final episode has demonstrated that there is a lot more to be discovered about Cassia and Cole, as well as their recently conceived child, who is revealed to be the Witness in a riveting storyline twist. Will things stay the same between them with this new knowledge burdening them? Are there choices to be made in order to prevent the impending apocalypse? The season finale of the science fiction mystery series failed to attract record numbers, but rated close to the more popular episodes of the season, drawing 0.43 million viewers to the screen. Despite the steadily declining ratings, immediately after the season three finale 12 Monkeys was renewed for a 10-episode third season, expected to air in 2017. We`ll be sure to inform you as soon as the release date is announced.

UPDATED June 30, 2016: In a rather surprising move, yet one that was certainly satisfying for the fans of the time-travel thriller 12 Monkeys, SyFy has decided to renew it for a third season. The ratings have progressively declined through the premiere chapter and the first part of the second installment, which apparently did not deter the network from going forward with the series. The upcoming chapter will consist of ten episodes and will be even more compelling, according to EP Terry Matalas. Meanwhile tune in to the second half of the current second season – brand new episodes are set to air on July 11, 2016. Sign up for our automatic updates and receive release date info for 12 Monkeys season 3 right in your mailbox.

UPDATED July 20, 2016: The first promo teaser trailer has already been released by SyFy, and EP Terry Matalas confirms the news via his official Twitter account – the third season of 12 Moneys will air in 2017. After the identity of the Witness was revealed in the shocking and heartbreaking season two finale of the show on July 18, 2016, the relationship between Cassie and Cole may not remain the same when season 3 kicks off. Sign up for our automatic notifications and don`t miss any relevant information or the release date of 12 Monkeys season 3.

Share this with friends:
ReleaseDate.show » Release » Syfy officially renewed 12 Monkeys for season 3 to premiere in 2017
Related Serial
When Will