This article has the most up-to-date info on the status of Blunt Talk Season 2 as we continuously monitor the news to keep you in the know. Starz has scheduled the premiere date for a new season for October 02, 2016. 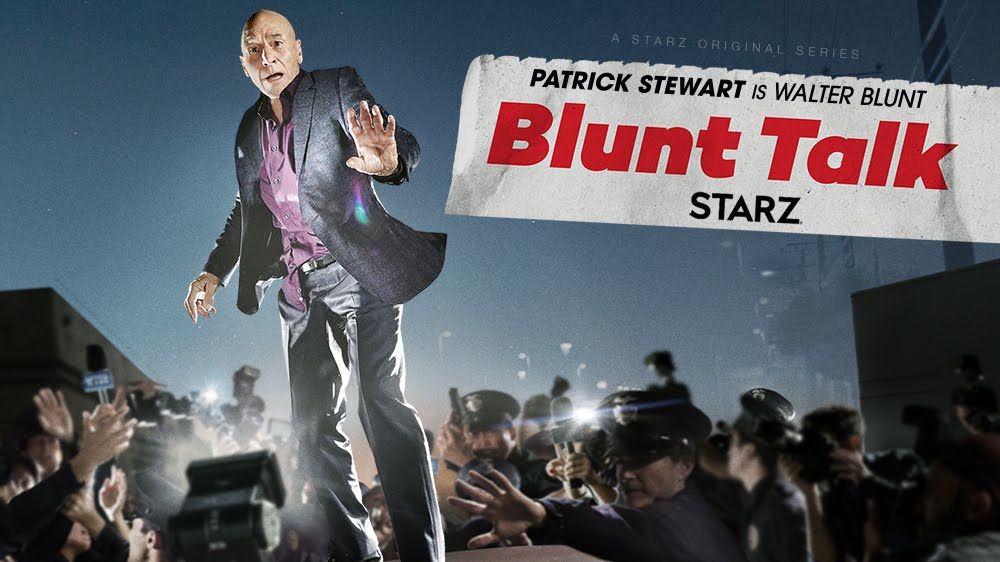 Blunt Talk is an American sitcom television show that follows the life of a British newscaster who moved to Los Angeles with the hopes of conquering the American nightly cable news. The show debuted on Starz on August 22, 2015.

Blunt Talk is a new comedy that stars Walter Blunt (played by Patrick Stewart) as a British TV journalist who is determined to preach proper living to the American public despite his disastrous personal life. In a classic case of a powerful man behaving badly, the series features Blunt’s recent move to L.A. with his alcoholic manservant, and the baggage of several failed marriage. In season 1 of the series premiere, viewers are introduced to Blunt as he publicly declines into the abyss of drinking and driving, consuming marijuana edibles and picking up a prostitute.

Written and created by Jonathan Ames, Blunt Talk has received mixed reviews from critics and audiences — scoring a mere 53% approval rating on Rotten Tomatoes. Led by by Patrick Stewart, famous for his role as Captain Jean-Luc Picard in Star Trek: The Next Generation and the X-Men franchise, the all-star cast also features Jacki Weaver of Silver Linings Playbook, and Adrian Scarborough from the award-winning movie The King’s Speech.

Produced by Media Rights Capital and Fuzzy Door Productions, and executive produced by funnyman Seth MacFarlane, the show’s 20 episodes are set to air over two seasons. However, Starz has not yet officially announced a release date for season 2.

UPDATED December 2, 2015: Starz has decided to renew Blunt Talk for a second season in spite of the first ten episodes being rather disappointing ratings-wise. Not only were the numbers low, they also followed a steady downward trend throughout the freshman season. The network, however, apparently has faith in the famous British lead actor Patrick Stewart, if nothing else. Subscribe to our notifications, don`t miss the second season premiere and find out what the series` creators have in store for the viewers.

UPDATED July 22, 2016: The long-awaited second season of Starz` series Blunt Talk is not too far away. It is tentatively scheduled to air in October 2016, but the exact release date is yet to be revealed. Walter will reignite an old flame when she comes back into town in order to examine a deep-rooted conspiracy around a very poignant environmental threat in LA. More hilarious and provocative episodes are bound our way, although it`s never soon enough, so please stay tuned and we`ll inform you of the release date as soon as it is revealed.

UPDATED August 2, 2016: If you’ve been eagerly awaiting the launch of Patrick Stewart-led sitcom Blunt Talk, you can mark your calendars, because the release date has just been set by Starz for its second season. On October 2, 2016 at 9pm the sophomore installment will kick off, immediately preceded by the premiere of Ash vs. Evil Dead. The hilarious new season features Walter Blunt and his crew enjoying ratings success, when an old flame is reignited, leading Walter into an intricate environmental intrigue that might change the future of LA. Sign up for our automatic updates, and we’ll drop you a reminder one day prior to the season premiere.

VH1 is yet to renew Amber Rose Show for season 2

ITV is yet to renew Vera for series 7

The release date for Vera series 7 — PendingThis article has the most up-to-date info on the status of Vera Series 7 as we continuously monitor the news to keep you in the know. ITV is yet to make a decision on its future. Subscribe to our automatic…