This article has the most up-to-date info on the status of BoJack Horseman Season 4 as we continuously monitor the news to keep you in the know. Netflix has officially renewed the series for another season. To get notified of the premiere date – subscribe for updates below. 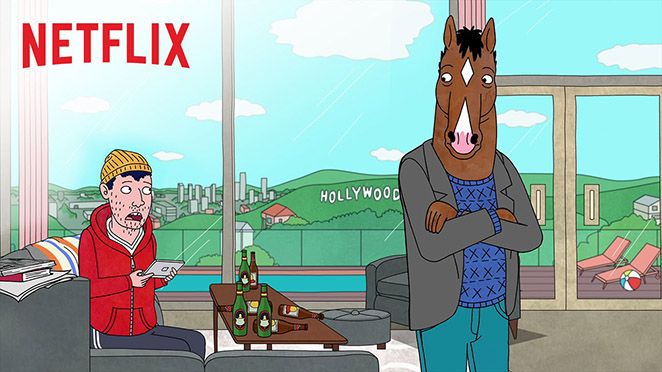 BoJack Horseman is an American animated blend of comedy and drama produced for and available exclusively on Netflix. Created by Raphael Bob-Waksberg and designed by leading cartoonist, Lisa Hanawalt, the first season of the adult animated series debuted on the online streaming service on August 22, 2014.

BoJack Horseman takes viewers into a world where humans and animals live side by side. BoJack (voiced by Will Arnett) is a horse who has grown bitter and spiteful since his heyday as a celebrity on a late ‘90s sitcom. Planning his big return to Hollywood, BoJack hires a human ghostwriter Diane Nguyen (voiced by Alison Brie) to help him pen a tell-all autobiography. In season 1, BoJack is joined by his supporting cast of characters, including his agent, and on-again-off-again ladyfriend Princess Carolyn (voiced by Amy Sedaris), his roommate Todd Chavez (voiced by Aaron Paul) and Mr. Peanutbuter (voiced by Paul F. Tompkins) who is BoJack’s former sitcom rival and current boyfriend of Diane.

Season 3 of BoJack Horseman premiered on July 22, 2016 with 12 episodes, once again garnering critical acclaim and keeping his fans very happy. In the current season Bojack Horseman is in the midst of a mid-life crisis, dealing with his fame and it`s all very, very serious. He is dealing with some profound philosophical issues, but the show is as hilarious, silly and exquisitely crafted as always. BoJack is attempting to get an Oscar for his “Secretariat” movie, and he is plunged into even greater depths than last season, and considering the ending (no spoilers), there was practically no way around a fourth season. Eager to capitalize on the show`s success – and on BoJack`s depression – Netflix announced the renewal of its hit series for a fourth season right after the third season was made available to Netflix subscribers. No further details have been released at this time, so please stay tuned for network announcements.

Share this with friends:
ReleaseDate.show » Release » Netflix has officially renewed BoJack Horseman for Season 4
Related Serial
When Will