This article has the most up-to-date info on the status of The Kennedys Series 2 as we continuously monitor the news to keep you in the know. Unfortunately, BBC One has officially canceled the series. There will be no Series 2. 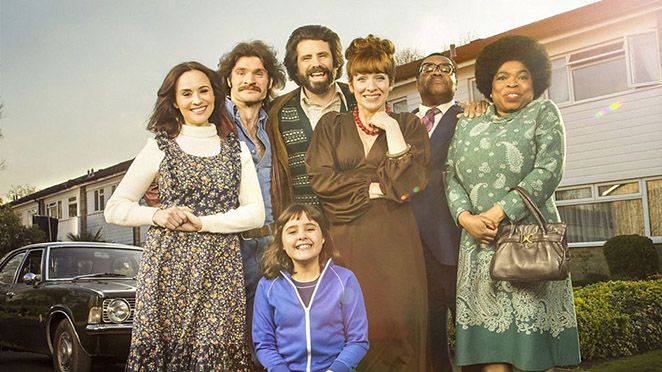 The Kennedys is a British comedy television series that is loosely based on memoirs of actress and comedian Emma Kennedy. Set in the ‘70’s, this is a multi-generation family comedy that focuses on one family’s attempt to move up the social ladder. Series 1 of The Kennedys premiered on October 2, 2015 on BBC One.

Although the Kennedys are excited about their new estate in Stevenage and becoming middle class, living in a maze of identical houses makes everyone look and feel just the same. So the family decides to do everything it can, from organizing talent shows to hosting dinner parties, to stand out and become the leader of the community.

The show is full of the warm sentiment of the ‘70’s – a time that many still remember vividly and fondly. It seems, that series like this one are set for success, especially, when they are based on a best-selling novel and have a stellar cast. Although, there is no official news on whether it will be continued next year, if the ratings keep rising as they do now, we are sure to see The Kennedys Season 2 sometime in 2016.

Updated February 25, 2016: The Kennedys, a “gentle” biographical sitcom created by Emma Kennedy, has been axed after just one series on BBC One. The viewership ratings, while decent for the first series of a show, could not quite match the numbers brought in by shows like Gogglebox. After the cancelation of the show by BBC One, BBC Two also declined to pick up the series for a second run. Emma Kennedy cited a total lack of social media support as one of the reasons for low viewership. The six episodes of The Kennedys aired in late 2015.

Share this with friends:
ReleaseDate.show » Release » BBC One officially canceled The Kennedys Series 2
Related Serial
When Will

BBC Two has officially renewed Cradle to Grave for Series 2