This article has the most up-to-date info on the status of Power Monkeys Series 2 as we continuously monitor the news to keep you in the know. Channel 4 is yet to make a decision on its future. Subscribe to our automatic updates below. 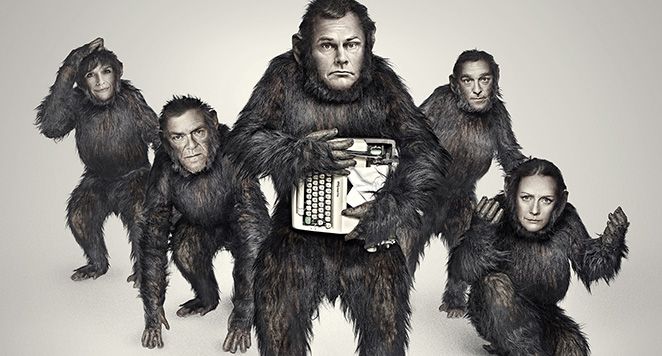 Power Monkeys is a brand new British comedy series broadcast on Channel 4. The topical comedy is a spinoff from the 2015 Ballot Monkeys. It is written by Andy Hamilton and Guy Jenkins, executive produced by Jimmy Mulville and hails from Hat Trick Productions. It premiered on June 8, 2016 and contains six half-hour episodes. The unusual thing about its production is the fact that one third of each episode is written and filmed within hours of the broadcast, in order to allow the characters to react to real-life events that have just occurred.

Power Monkeys chronicles the operations of four separate mid-level units of political agents in the run-up to the EU membership referendum and the upcoming US Presidential election. Everything that goes on in the two opposing camps and everything in between is lampooned with great skill. The four locations are a Vote Leave campaign bus, Conservative Party “Unity unit”, Donald Trump presidential campaign plane and a Kremlin office full of Putin`s aides.

The series premiered to 0.9 million viewers, sliding to 0.69 million for the second episode. It has a 7/10 out of IMDb rating, and is mostly positively reviewed by the critics. The issue that does trouble some of the viewers is that while the series is as cutting-edge as it can possibly be, there`s a feeling that it puts too much into that aspect, and less than it might into the comedic value. In any case, it`s a popular series that very well may spawn another spin-off when appropriate political agenda comes up.

Subscribe to receive news and updates when a show is renewed or canceled. You will receive an automatic email when thePower Monkeys Series 2 Episode 1 release date is officially announced.

Share this with friends:
ReleaseDate.show » Release » Channel 4 is yet to renew Power Monkeys for series 2
Related Serial
When Will

ITV is yet to renew Newzoids for series 3

The release date for Newzoids series 3 — PendingThis article has the most up-to-date info on the status of Newzoids Series 3 as we continuously monitor the news to keep you in the know. ITV is yet to make a decision on its future. Subscribe to our…