This article has the most up-to-date info on the status of The Goldbergs Season 4 as we continuously monitor the news to keep you in the know. ABC has scheduled the premiere date for a new season for September 21, 2016. 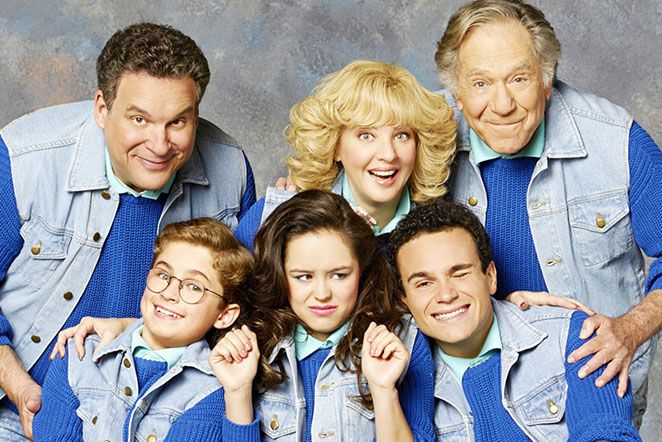 The Goldbergs is an American television series that follows the lives of an 11-year-old geeky Adam Goldberg and his dysfunctional family, set in the much simpler 1980’s. Created by Adam Goldberg, the series is based on his childhood spent in Jenkintown, Pennsylvania. The show premiered on ABC on September 24, 2013 and has had a successful three-season run. Season 3 of the series aired on ABC on September 23, 2015.

Before Facebook, blogging, gluten-free diets and lawsuits for parent negligence, there was a simpler time called the ‘80’s. These were the wonder years for many children, and Adam Goldberg was not an exception. Even when he was a child, Adam wanted to document the chaos that happened in his family with his video camera to give an inspiring look into a middle-class family life for aspiring writers. And there were a lot of topics provided by his overprotective mother, hot-tempered father, terrifying sister, a middle-child syndrome brother, and his beloved grandfather, who goes from offering alcohol to the kids to teaching them about sex.

The Goldbergs is a fun show about the way life used to be for a regular American family. Shows like this are quite popular in the US, which is proven by its viewer base – 6.48 million overall viewers. Although ABC has not announced whether it plans to pick up the series for another season, we believe that there is still a lot to explore in the life of the teenage Adam Goldberg. Thus, we hope to see The Goldbergs Season 4 in the fall of 2016.

The third 24-episode season of ABC`s hit sitcom The Goldbergs has wrapped up on May 18, 2016. The season finale featured Adam and his soon-to-become college freshman friends panicking about the hazing that awaits them in the upcoming year, while Emily and her pals contemplate what their time capsule should contain. The third installment of the popular family series averaged approximately 6.5 million viewers per episode. In a predictable move the show has already been renewed for a fourth season by ABC in March 2016, since its excellent ratings and positive reviews basically left the network no chance but to bring it back. Considering the broadcast scheduling trend, it is very likely that we`ll see the fourth season of The Goldbergs in the fall of 2016 with more of the heartwarming 1980`s family life captured with the same sensitivity and humor.

UPDATED December 22, 2015: After broadcasting episode 10 of the current season on December 9th, the ABC’s sitcom The Goldbergs has left for a Christmas break. The comedy series will return with all new episodes on January 6, 2016. The show is currently averaging around 7 million viewers per episode and will most likely be renewed.

UPDATED March 4, 2016: While fans are still enjoying the current, third season of the ABC channel’s hit sitcom The Goldbergs, the network has decided to grant an early renewal to the award-winning comedy series. The renewal decision, announced yesterday by the new ABC Entertainment president is not surprising because to date, the current installment of the show is bringing in on average almost 9 million total viewers, making it the network’s second top-rated comedy series after the fan favorite Modern Family. The premiere date is yet to be schedules, to stay tuned and come back for the recent developments.

UPDATED June 29, 2016: As you enjoy hot summer days, it is time to start looking forward to another exciting television season that begins in September. The ABC channel was the last from the major networks to finalize its 2016-17 fall programming slate. Wednesday nights again will be dedicated to sitcoms and comedies and this year will open up with the premiere of a fourth season of The Goldbergs on Wednesday, September 21, 2016 at 8pm ET/PT, followed by the series premiere of Speechless at 8:30pm. Subscribe to our updates and we will send you an automated reminder by email about the release date of The Goldbergs season 4 one day before it hits the small screen.