This article has the most up-to-date info on the status of Life in Pieces Season 2 as we continuously monitor the news to keep you in the know. CBS has scheduled the premiere date for a new season for October 27, 2016. 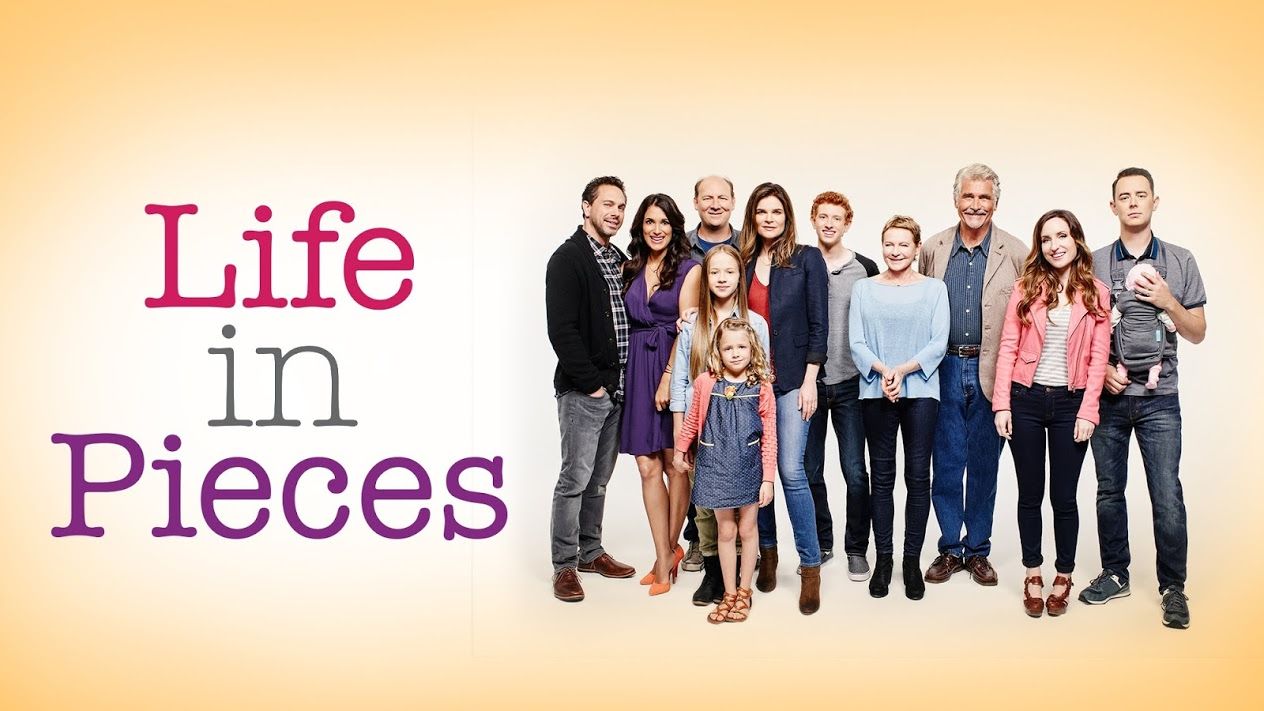 Life in Pieces is an American sitcom that chronicles the lives of three generations of a family. Created by Justin Adler, the series first of five episodes premiered on September 2, 2015.

Life in Pieces shows a multigenerational family as they face the up and down realities of adult life. The single-camera comedy series follows the lives of the Short family, telling their own versions of what happened over the course of each episode. With the simple premise “One big family. Four short stories.” CBS hopes to position the show as its own version of ABC’s Modern Family.

In season 1 premiere viewers meet each member of the Short family, which includes an eccentric patriarch, his devoted wife and their three children played by Thomas Sadoski (The Newsroom), Colin Hanks (Orange County) and Betsy Brandt (Breaking Bad). Despite an all-star cast that also includes Dianne Wiest as Joan Short, and James Brolin as John, the series has been steadily dropping in ratings. Opening to more than 11 million audiences, episode five, titled “Babe Secret Phone Germs”, drew in just under 8.5 million. Fan reviews have also been mixed, landing a less than stellar 62% on Rotten Tomatoes. It’s too early to tell whether CBS will pick up Life in Pieces season 2, or let it fall by the waste-side. Don’t forget to tune in to episode 6 on a new night, starting Thursday November 5, 2015 at 8:30pm ET/PT (7:30pm CT) on CBS.

A 22-episode debut chapter of the CBS network’s newest sitcom Life in Pieces concluded in the US on Thursday, March 31, 2016. The finale has attracted a very sizeable audience, so the probability of a renewal seems very high at the moment. In general, the network has had a very good run with many of its original sitcoms, the most successful being The Big Bang Theory. The new comedy series opened up last September with an impressive audience of more than 11 million viewers, and although the ratings dipped starting with a second episode to just below 9 million, they have been able to stay at that level, bringing the average viewership for the debut season to around 8.9 million. In the finale episode, Greg quits his job to pursue a new career path while John and Joan finally open up to their children about a secret that was hidden for more than 30 years. What did you think of the debut chapter of the sitcom? Do you think the series should get renewed?

UPDATED December 22, 2015: The first half of the 22-episode season of the CBS’s freshman sitcom Life in Pieces concluded on December 17, 2015 and the show left for a Christmas break. The remaining episodes of season 1 are expected to resume on CBS on January 7, 2015. After the freshman series got a full season order, everyone has started talking about a potential renewal announcement. This is a very likely scenario with 9 million viewers per episode.

UPDATED May 12, 2016: The first one of CBS` new series to receive a pickup for a second season ahead of the next week`s upfronts was Life in Pieces, this season`s top-ranking new comedy series across broadcast networks. The show averaged an impressive 2.7 demo rating in the 18-49 demographic and 10.53 million viewers in its freshman run, and was a safe candidate for renewal. CBS and 20th Century, the production company behind the series have had some disagreements but apparently managed to overcome them, which allowed to keep the popular series on the air.. The exact release date is still to be announced, so please sign up for our automatic updates and we`ll be sure to keep you informed.

UPDATED June 22, 2016: The new fall schedule has been revealed by CBS. The second season of its breakout hit comedy series Life in Pieces is set to air on Thursday, October 27, 2016 at 9:30, preceded by The Big Bang Theory, The Great Indoors series debut and Mom season premiere. One of the ratings leaders last season, the multigenerational sitcom is very likely to be a hit this season as well. Sign up for our automatic updates, receive a reminder of the season premiere date one day in advance and see for yourself.

The release date for This Life Season 2 — PendingThis article has the most up-to-date info on the status of This Life Season 2 as we continuously monitor the news to keep you in the know. CBC has officially renewed the series for another season…

This article has the most up-to-date info on the status of Telenovela season 2 as we continuously monitor the news to keep you in the know. Unfortunately, NBC has officially canceled the series. There will be no season 2.Series info and…