This article has the most up-to-date info on the status of Madam Secretary Season 3 as we continuously monitor the news to keep you in the know. CBS has scheduled the premiere date for a new season for October 02, 2016. 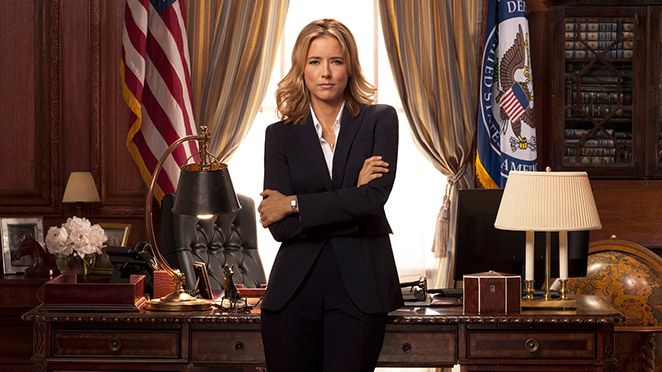 Madam Secretary is a new American political drama TV series that follows a former CIA analyst, and college professor, who has been promoted to the post of U.S. Secretary of State. Created by Barbara Hall and executive produced by Lori McCreary and Morgan Freeman, the series debuted on CBS on September 21, 2014.

Madam Secretary tells the story of Elizabeth Adams McCord (Tea Leoni) who has been a CIA analyst for 20 years before starting her career as a professor of political science at the University of Virginia. Elizabeth is superbly bright, but is not a natural politician — so when her old boss Conrad Dalton (Keith Carradine) becomes the President of the United States and needs to replace a Secretary of State, who recently died in a plane crash, Elizabeth returns to Washington DC and steps up to assume the role. Drama ensues as Elizabeth clashes with the White House Chief of Staff Russell Jackson (Zeljko Ivanek).

Season 2 of Madam Secretary premiered on October 4, 2015 and is slated to air for 22 one hour episodes. This is yet another successful political drama series on the CBS roster of prime time programming. Last season the series averaged a whopping 14.16 million viewers, surpassing the network’s most successful show Scandal. With ratings of nearly 11 million viewers already, Madam Secretary season 3 is probably already in the works. CBS has made no formal announcements yet, so viewers will need to stay tuned for more information.

A 23-part sophomore season of the CBS network’s highly-rated political drama Madam Secretary bowed out in the US on Sunday, May 9, 2016 and the show has again been able to deliver a very impressive average viewership with more than 10 million people per episode which has warranted it an early renewal. Since the drama in Islamabad was wrapped up in the previous episode, many fans have been worried that the finale would lack excitement. Well, the creative team proved them wrong. Between Stevie’s engagement, Bess almost losing her job and the trade for Dmitri Petrov there was surely no lack of drama and intensity in the final hour of the season.

UPDATED December 22, 2015: CBS’s sophomore political drama series is taking a holiday break after it aired its mid-season finale on December 13, 2015. The remaining episodes of season 2 of Madam Secretary are scheduled to resume on the CBS channel in the US on Sunday, January 10, 2016. With an average viewership at around 10 million, the renewal chances are very high.

UPDATED March 26, 2016: The sophomore political drama television series Madam Secretary still has a few episodes left in its current run before it bows out, but the CBS executives confirmed their confidence in the show’s future by officially greenlighting it for another season. The network has decided to follow in the footsteps of the ABC Entertainment which announced an unexpected bulk renewal of a bunch of their ongoing shows two weeks ago. The renewal of the political drama was easily predicted, as the show is currently attracting on average more than 10 million viewers per episode, having lost just 12% of its debut run’s viewership. The sophomore series has also already garnered a few approval nods from critics.

UPDATED June 22, 2016: On June 21, 2016 CBS has revealed its fall programming schedule. The third season of highly-rated political drama Madam Secretary will be launched on October 2, 2016 at 9pm, preceded by NCIS: Los Angeles and followed by Elementary. The last season of Madam Secretary has once again delivered very impressive ratings of approximately 10 million viewers per episode, and the upcoming season is likely to be as full of political intrigue, drama, secrets and lies as the previous two. Sign up for our automatic updates and receive a reminder one day prior to the premiere date of Madam Secretary season three.

E! officially renewed The Royals for season 3 to premiere in December 2016

CBS is yet to renew Madam Secretary for Season 4