The release date for Brother vs. Brother Season 5 — Pending

This article has the most up-to-date info on the status of Brother vs. Brother Season 5 as we continuously monitor the news to keep you in the know. HGTV is yet to make a decision on its future. Subscribe to our automatic updates below. 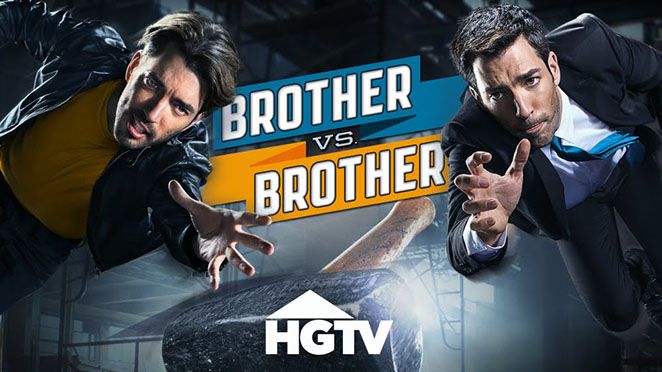 Brother vs. Brother is a home improvement reality show that pits twin brothers Jonathan Scott and Drew Scott against each other as they mentor a team of renovation experts and try to win a $50,000 prize. The series debuted on July 21, 2013 on HGTV, and season 4 premiered on June 1, 2016.

Jonathan and Drew have become household names as the co-hosts of HGTV’s super successful shows Buying & Selling and Property Brothers. They’ve captivated millions of viewers with their unique ability of finding their clients beaten up fixer uppers and transforming them into picture perfect properties. Usually working together, in Brother vs. Brother the twins go head to head to compete for a grand prize as they coach multi-talented home improvement experts in the art of increasing real estate value.

Brother vs. Brother season 3 aired a total of 14 one hour episodes and attracted over 13 million viewers. Season 4 is averaging approximately 2.2 million viewers per episode, which is a very solid number. In each episode, Jonathan and Drew’s teams are assigned properties of similar value and structure which they must renovate and decorate on a limited time and budget. Competitors are eliminated each week, with the last one standing winning the cash prize. The fourth installment follows Jonathan and Drew Scott`s stint in Las Vegas, where they compete in buying, renovating and quickly flipping a fixer-upper – for a profit, of course. Local community will receive the proceeds from the contest. Please stay tuned for relevant updates.

Subscribe to receive news and updates when a show is renewed or canceled. You will receive an automatic email when theBrother vs. Brother Season 5 Episode 1 release date is officially announced.

Share this with friends:
ReleaseDate.show » Release » HGTV is yet to renew Brother vs. Brother for Season 5
Related Serial
When Will