This article has the most up-to-date info on the status of Skin Wars Season 4 as we continuously monitor the news to keep you in the know. GSN is yet to make a decision on its future. Subscribe to our automatic updates below. 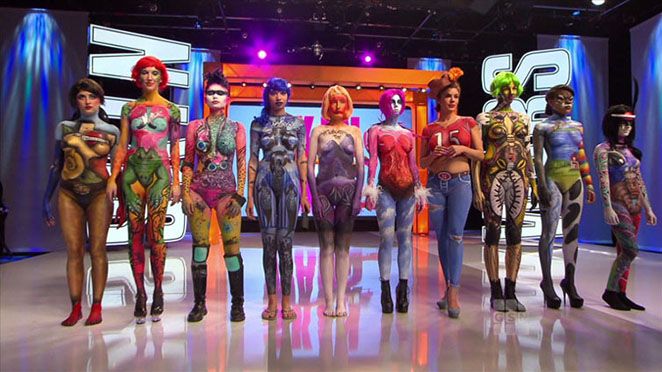 Skin Wars is an American reality competition television series that features body painting challenges that are presented to 12 competitors. Hosted by Rebecca Romijn, the series first aired on Game Show Network in August of 2014. Season 3 of Skin Wars premiered on April 20, 2016. The series also airs in Australia on LifeStyle You, Canada on GameTV and the UK on TruTV.

The series is built on an original concept – it is the first to feature body painting on television in a competition format. Judges RuPaul, Robin Slonina and Craig Tracy determine which one of the contestants will be crowned body painting winner, receive the $100 000 grand prize and as well as a custom-made stencil line from Bad Ass Stencils, and be sent to the Austrian World Body Painting Festival. Each of the hour-long episodes presents challenges that push the artistic abilities of the participants to the limits and shows the audience the amazing things that can be done with body paint. Whether professionals or amateurs, anyone can take part in this exciting tournament.

Skin Wars is an exceptionally creative show that can be interesting to those who work in the field of body art, as well as an average Joe. The series has been received very well by critics and viewers and is the most watched original program on Game Show Network, drawing in 725,000 at the series high. The third season has premiered to a significantly smaller audience than the previous seasons, at 428,000 viewers, and a 0.2 demo rating, going up to 566,000 for the second episode, but dropping subsequently. Although GSN has already announced the production of a spinoff called Skin Wars: Fresh Paint, which premiered as a special in 2015 and received a full season order for 2016, there’s still no official news on whether the original series will be picked up for season 4. Stay tuned and we will be sure to inform you as soon as the network makes a decision either way.

Subscribe to receive news and updates when a show is renewed or canceled. You will receive an automatic email when theSkin Wars Season 4 Episode 1 release date is officially announced.

Share this with friends:
ReleaseDate.show » Release » GSN is yet to renew Skin Wars for Season 4
Related Serial
When Will